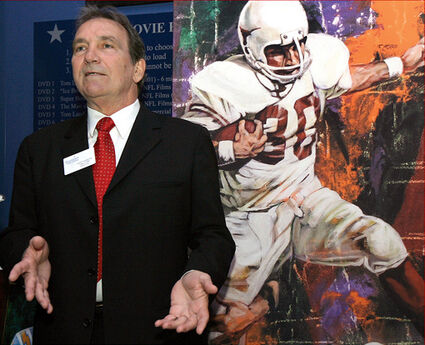 In March 2009 in the aftermath of Hurricane Ike, Steve Worster, as he was inducted into the Texas Sports Hall of Fame on its 50th anniversary in Waco (above), the Waco Tribune under the headline "Longhorn legend Steve Worster remains dedicated to hometown of Bridge City" he told reporters "We've been eating off our laps and off picnic tables. The Salvation Army fed us for the first month. But it's fascinating to watch what people have done for each other in Bridge City. There's a lot of good solid human beings who still care about their town and each other here."

Steve Worster was probably the biggest celebrity from Orange County. He died Saturday at the age of 73. Though his peak fame coming during his teens and early 20s, the news of his death has put his name in headlines once again.

He was a football running back and was one of those once-in-a-lifetime high school and college players. "We always say he put Bridge City on the map," said Darrell Segura, his longtime friend and high school teammate.

The headlines of his death are on websites, podcasts, and social media. No one had ever heard those words in the mid-1960s through the first years of the 1970s. That was the height of his fame.

The era had daily newspapers in thousands of cities and towns across the country with home readers perusing the pages every day. Newstands and stores had aisles of magazines with slick covers inviting browsers to read and buy.

Only three TV networks brought entertainment, sports, and news to millions of viewers across the nation. Radio networks also sent news, sports, and programs to hundreds of individual radio stations.

Steve Worster made all the major media of his day. Newspapers carried stories about him. He appeared on uncountable magazine covers, including the biggest one, Sports Illustrated. His college choice made network news. Sportscasters touted his abilities. He surpassed the simple description of "football star." He became an icon and a legend.

The fame came when he was a young teen playing football for little Bridge City High School. The town wasn't even called Bridge City until about 20 years before Worster began playing ball. It wasn't incorporated and the population was less than 5,000.

But in football-loving Texas, Worster's running skills gained everyone's attention. He was six feet tall and weighed a little more than 200 pounds. "That was really big in those days," Segura said.

Not only was he big and muscular, he had good looks with dark hair. His hair was longer than the crew cuts or burr styles most football players wore in those days. The cut resembled an early Beatle style. The group was a sensation in early 1964. By the fall of that year, Worster was playing Cardinal football great enough to earn all-state honors his sophomore year.

Worster earned all-state honors his junior and senior years, too, making him a rare three-time Texas all-state running back. His statistics on yardage made him the dream of every major college coach in the country.

At that time, college recruiting was only for high school seniors and the NCAA had a limited time span for coaches to coax a player and his family to choose a school. News stories reported private planes flying coaches so they could visit the Worsters.

Despite the fame Worster had at a young age, Segura said "Steve was the most humble member of the (Cardinal) team. I've never met anyone more humble."

Segura recalls a story from Worster about learning a lesson. Worster was sitting on a couch at home one evening reading the paper, "probably the Orange Leader," Segura said. Worster's father came home and asked what he was doing. "Reading about myself," Worster replied.

His father reached over, grabbed the paper, wadded it up, and threw it in the trash. "Don't listen to that mess. It will give you the big head," his father told him.

The University of Texas coach, fabled Darrell Royal, won the recruiting battle for Worster in 1967. The Associated Press sent the photograph across the country. Network news reported Worster becoming a Longhorn.

When he went to the University of Texas in the fall of 1967, Worster played on the freshman football team because NCAA rules at the time did not allow freshmen to play with the varsity.

Royal had been planning for the 1968 team after years of using his country charm to recruit outstanding high school players. He created something new for his sophomore star fullback from Bridge City, a new backfield formation designed to highlight Worster's running abilities.

Radio announcers were perplexed when the Longhorns came out in the new configuration. It took a couple of games and a quarterback change, but what became known as the "wishbone-T" became a classic football strategy.

Fans called him "The Big Woo" and would yell "Woo Woo" at games.

Worster and his Longhorn teammates rolled up the wins for the next couple of years. They had a 30-2-1 record, won three Southwest Conference titles, and two national championships. Worster was named All-American twice. By his senior year, he was the "cover boy" of countless sports magazines. He was fourth in voting for the Heisman Trophy in 1970. Three quarterbacks came before him with Jim Plunkett winning the trophy. Next came Joe Theisman and Archie Manning.

The Los Angeles Rams drafted Worster in the fourth round in 1971, but he never reached a contract agreement with them. Football fans today might find it hard to realize that most players in the 1960s and 1970s did not earn salaries to make them rich like today's players. Worster went to Canada and played a year.

Segura said his friend was then offered a tryout with the St. Louis Cardinals and went to a training camp for them. After two weeks, he decided to retire.

"Darrell, I'm just burned out," Worster told him. "I've been playing since I was a kid."

Segura said Worster was a manager of a business in San Antonio and eventually moved back to Bridge City. For a number of years he successfully worked in industrial sales. "Can you imagine someone coming into your office and saying 'Steve Worster would like to see you?'" Segura said.

Worster had two children, and though he and his wife divorced, she and the kids have lived in Orange County. Segura said his friend stayed close to his children, Erinn and Scott, and later, his grandchildren.

People in Bridge City still talk about how a half century after Worster played ball, they get comments "Isn't that where Steve Worster is from?" when they tell people there hometown. Segura said he has heard it many times.

He said he and Worster became closer in their later years, especially after Worster began having some health problems. Some of those problems could have been brought on by the heavy hitting in football. In high school, Worster played offense and defense. They were taught to tackle by running their helmeted heads into an opponents chest. Segura said those kind of blows can bounce the head. Worster took the blows on offense and delivered them on defense.

Bridge City incorporated as a city when Worster was in college. On the city's 50th anniversary, the Chamber of Commerce named him Citizen of the Year for bringing attention to the town. He also has numerous other honors including being inducted into the Texas Sports Hall of Fame, the Texas High School Hall of Fame, University of Texas Hall of Honor, and the Cotton Bowl Hall of Fame.

The football legend lived most of his life quietly, away from the clamor of his early fame, leaving behind the game.

"I heard stories about him going to parties where people were watching football," Segura said. "He would go out on the patio, away from the game." 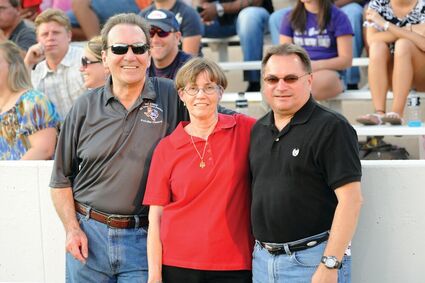 Segura will give the eulogy at Worster's funeral, which will be held Saturday at Claybar Funeral Home on Fifth Street in Orange. Visitation will be from 11 a.m. to 2 p.m. with services beginning at 2.