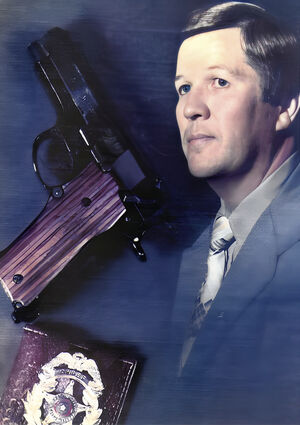 Wilson Roberts, 84, of Orange, passed away on August 11, 2022, at St. Elizabeth hospital in Beaumont. Wilson was born in Beaumont, Texas, on November 7, 1937, he was the son of William and Madeline Roberts. He was a wise man dedicated to his family and community. Wilson started a long and fulfilling career as a Sheriff’s Office Deputy in Jefferson County before he instilled the Bridge City Police Department and becoming the town’s first police chief. He grew the department over the years, always more concerned with the safety and care of his community than being feared. Wilson laid the foundation for the small home town feeling of Bridge City, by the end of his career he had worked as an investigator at the Orange County District Attorney’s Office, an area arson investigator, at the Orange County Sheriff’s Office, and police chief of Kountze. He often found time to go hunting and fishing, and enjoyed the outdoors as much as he could. Wilson had an understanding of life that’s not too common and was very knowledgable in a variety of different things. He enjoyed watching the news every day and keeping up with all that was happening around the world. Wilson will be remembered for many things for years to come, if nothing else than riding around town in his fuchsia truck. He was an incredible man who did many phenomenal things in his life. Wilson was loved dearly by all and will truly be missed for years to come. He is preceded in death by his parents, William and Madeline Roberts; and daughter, Kathy Ann Viator. He is survived by loving wife, Veronica Roberts; daughters, Keshia Renee LeBouef and husband, Blake of Liberty Hill, Stephanie Alice Clark, Samantha Anne Turner both of Kingwood; numerous grandchildren and great-grandchildren; sister, Madeline Seeberger; and furbaby, Shiloh Willie Roberts.