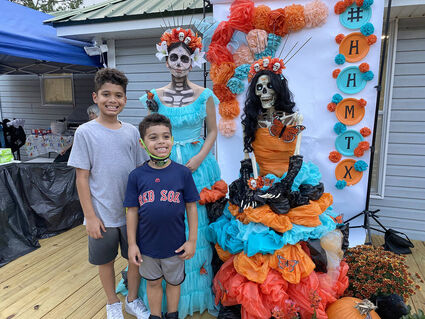 Once a year, Orange's history comes alive as local high school drama students dress up and tell true stories from the past. The Heritage House Museum in downtown holds the Historic Ghost Walk in October. The date this year is Saturday, October 15.

Because of the success of the past ghost walks, Heritage House is turning the event into a fundraiser and festival.

"We never expected the Historic Ghost Walk to become so popular," said Adam Conrad, president of the Heritage House board of directors. In 2021, nearly 350 people paid to do the walk downtown and more than 60 drama students participated. Along with volunteers, more than 500 people were in downtown that evening.

Conrad said the high school drama students look forward to dressing up and presenting the fascinating local stories of events and people. Students from all five public high schools in the county are expected to participate.

The presentations are made at the sites around the Sabine River where the history occurred. People on the tours walk from Heritage House Museum on Division Avenue east on Division and along the river to Front Street and then circle back.

The walk goes around the crescent of the Sabine River, which carried the first non-Indigenous settlers to what was first called Green's Bluff. The town grew around the river with early settlers living nearby so they could carry water to their houses. The river also was the major traffic carrier, bringing explorers, pirates, settlers, and immigrants seeking to make new life.

Heritage House is rotating the in-depth stories of the shoot-outs and scandals around downtown. This year's stories will include the Orange County War of 1856, and how people rode "The End of the Line" railroad to Orange. Also there will be stories about illegal gambling across the river and how in 1988, Constable Jack Thompson in his trademark red Camaro had a high-speed chase through downtown with a serial killer driving a stolen Corvette.

Heritage House will use the Historic Ghost Walk as a fundraiser to help with the regular operations and the mission of the museum, which is to preserve local history and educate people about Orange County's past. Conrad said the museum board this year voted to award $500 scholarships to two of the participating drama students.

The crowd last year has also led to a reorganization of the Historic Ghost Walk schedule. Conrad said the history tour can be done only one day because of the difficulties in scheduling all the schools. So this year, two different walks will be held on the Saturday, October 15, date.

The first version will have groups leaving every 15 minutes during the hours of 3 to 5 p.m. Conrad said those tours will be more family-friendly and the costumed people from the past will not come near the children.

Tour tickets with times will be given. As people wait on their times, they can purchase food from food trucks, which will be announced. Free State Winery will sell to adults glasses of their local vintages and famous frozen sangrias. Heritage House will have tables and chairs set up on the back lawn. Lawn games and children's activities will also be offered as a way to pass the time.

Heritage House will give the students a dinner break back at the museum. During the break, singer-musicians Hailey and Brett Cooley will perform on the museums back deck from 5 to 7 p.m. Free State is sponsoring the show. 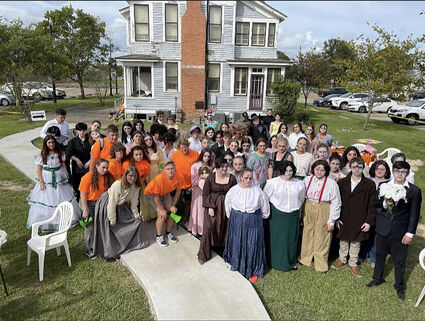 After the break, from 7 to 9 p.m. as darkness has descended, more tours will begin. Conrad said the night walks will include some more ghostly costumes and the ghouls will walk closer to the groups.

One main event sponsorship will be available for $5,000. The honor will include two reserved tables, walk admission for 15 people, VIP entrance, and two bottles of wine.

Lawn banner sponsorships are $500 and will allow the business or individual to have a 3x5 foot banner with business logo and information.

For $150, sponsors can get an advertisement-recognition yard sign installed at the story stop they choose.

Anyone interested in helping to sponsor the community Historic Ghost Walk festival should contact Charlotte Alford at Heritage House Museum, 409-886-5385, or email at [email protected]