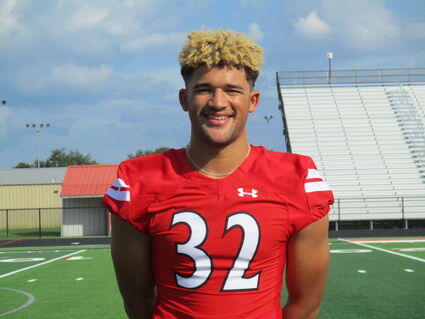 The second season for Coach Cody McGuire at Bridge City has entered Week One of the football season. McGuire and his Cardinals play their cross-county rival the Orangefield Bobcats in the first game of the season.

A final preparation for the opening of the season was to be a scrimmage with the Woodville Eagles last week. The weather was rainy and postponed the start of the scrimmage for two hours, and the Cardinals did not handle the delay as well as the Eagles when it finally did begin.

The Cardinals did play hard, but did not execute what they were coached to do. "I'm looking forward to it being real this week, and I think the kids are too. So, we're excited to be playing Orangefield in the Bayou Bowl," McGuire replied.

In the three weeks prior to Week One the Cardinals have progressed nicely. Mason Pruitt will be a great leader on defense for Bridge City from his inside linebacker position and played very well in the first scrimmage with Vidor.

JS Bearden was all-state last season but missed the first three weeks of practices with a hamstring injury. Bearden began practicing on Monday of this week and will be huge lift for Bridge City's defense according to McGuire.

A late addition to the Cardinals was Braylen Collins. He could be a starter on defense as a linebacker or secondary position.

Sophomore Merik Aras and junior Aden Lapeyrolerie have impressed the coaches enough to both start as outside linebackers. McGuire indicated, "We're young in the secondary with sophomore Austin Bellanger and junior Stephen Stone who will be great players for us. Bobby Drake is a senior who has not played a lot but will contribute also."

The Cardinals defensive line will be anchored by Nick LeJeune at noseguard. McGuire believes LeJeune is a great player. LeJeune is joined in the defensive line by a former Orangefield player Kayden Kibodeaux and Bryce Linder who are expected to be a solid front for the Cardinals on defense. "CJ Cane is a backup right now, but CJ is going to be a great player for us and he's going to help us," Coach McGuire thinks.

At least one Cardinal will play two-way. Cornerback Rayburn Hebert will also see time at running back because of his all around ability.

Bridge City is stocked with quality receivers starting with Gavin Bodin. The coach's son Case McGuire is working hard to get a starting position as a wide receiver. Jerris Brown should do some great things with his speed for the Cardinals. Collins will play both ways including at wide receiver.

Leading the offense is sophomore Hutch Bearden at quarterback. McGuire stated, "He's a great kid, great leader, and the more reps he gets the better he gets."

The Orangefield offense is the Slot-T mafia according to McGuire who added the Bobcats will be physical, and they are going to get after the opposing defense. The Bobcat offense is led by running back Cameron Dischler who McGuire called a stud. "He's their homerun hitter. They want him to get the ball quite a bit," McGuire pointed out.

Another dangerous Bobcat runner is speedster Gavin Perry-Koci who can go the distance on any carry. McGuire expressed concern about Bobcat freshman Mason Manning who looked good in the Orangefield scrimmages running the football.

Stopping the somewhat unique Slot-T used by Orangefield will be the key for the Cardinals' defense. "When you play the Slot-T a lot of teams try to do stuff they're not normally accustomed to doing. If you just play your base defense and play your basic rules you're usually fine, but you've got to match the physicality and you've got to make sure that you don't get caught up looking in the backfield. You've got to take care of your responsibility," McGuire emphasized.

The defense used by Orangefield is a 3-4 similar to that at Bridge City. The Bobcat defense like their offense is well coached, and the players are where they are supposed to be and doing their job.

McGuire watched the scrimmage between Orangefield and Silsbee, and the Bobcats held the explosive Tiger offense to fourteen points. McGuire observed, "They do a great job over there at Orangefield. The kids always play hard and they're coached well, and so it's always going to be a challenge."

Bridge City will be striving to get the victory over Orangefield. McGuire teaches to the Cardinals there are five ways they can get on the football field to help the team win any game.

The first way is playing hard every play in practice and in a game. Number two is the knowledge of your assignment as a player. If you do not know what you are to do the coach cannot put you on the field.

The fourth key is are you a great teammate by encouraging each other. McGuire stipulated, "The last thing is your God given ability. Do you make plays when you're out there. If you're doing those five things that we evaluate every kid in our program on we're going to be fine."

Friday's game for the Cardinals maybe non-district but it carries a lot of significance for Bridge City as the Bayou Bowl. The winner gets to take possession of the Buzzie Gunn Trophy which Orangefield has held for the last few years.

This is only the second Bayou Bowl for Coach McGuire but he already knows the impact a Cardinal win over Orangefield will have on the football program at Bridge City. "These kids grow up together, and it means something to everybody. Coach Smalley and I talked about it last year, and he said our communities expect us to play so let's play. We're going to get after it. I think the Bayou Bowl has been over there for a few years, so hopefully we can bring it back to Bridge City," McGuire concluded.

The Bayou Bowl will be Friday night at 7:30 between the Bridge City Cardinals and the Orangefield Bobcats. The game will be at Orangefield's F. L. McClain Stadium.