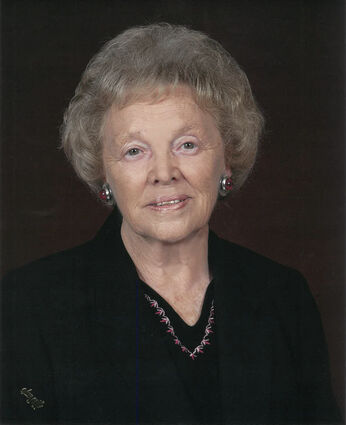 Edith Lily Knott Babcock was born on September 15, 1926, in Manchester, England. She lived to the age of 95.

Edith met Clarence Frank Babcock while he was in the Army and stationed in England during WWII. They were married at The Parish Church in Urmston, Lancaster County, England. She had her first son, Barry Frank in England and as a war bride, she and Barry came to the U.S.. Clarence was waiting for her in Carthage, Missouri where his family lived. They resided in Carthage for approximately 2 years and that was where their second son, John Edward was born. The Babcock’s also lived in Borger, Texas, Deer Park, Texas, and Orange, Texas, as a result of Clarence’s job opportunities with Phillips Petroleum. Edith was a loving wife, mother, grandmother, and great grandmother. She was a homemaker and involved in activities around her neighborhood and church. She later worked at Weiner’s Department Store.

She was a devoted and active member of Park Ave. Methodist Church and Faith United Methodist Church. She loved to watch soccer games and most especially Manchester United.

Edith is preceded in death by her husband, Clarence F. Babcock; parents, Samuel and Doris Knott; and her brothers, Kenneth and Leslie Knot.

The family wishes to give a special thanks to the care givers at Sabine Place, the wonderful Residential Care Home “A Place Called Home” and Southeast Texas Hospice.

Memorials can be given in honor of Edith Babcock to Faith United Methodist Church in Orange, Texas.