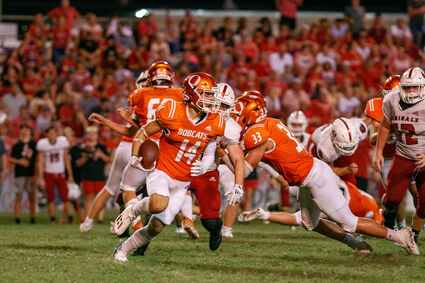 Gavin Perry-Koci breaks open for the Orangefield Bobacts in the 28-9 Bayou Bowl victory.

The Orangefield Bobcats took an early lead that helped secure another win in the Bayou Bowl. The Bobcats defeated their rivals the Bridge City Cardinals 28-9 on Friday night at F. L. McClain Stadium.

It was the opening game of the season for both football teams. Orangefield with the win reduces Bridge City's lead in the Bayou Bowl series to seven wins for the Bobcats to nine for the Cardinals. The Buzzie Gunn Trophy has been awarded to the winner between the two teams since 2001.

The Bobcats' defense held the Cardinals on the opening series forcing a punt. Orangefield took over at its 26 and drove 74 yards in eight plays to open the scoring. Halfback Cameron Dischler threw an option pass on the first play to Morgan Sampson to pickup 24 yards to midfield.

Dischler had his longest run of the night on the next play for 8 yards. Bridge City was keying on Dischler holding him to 37 yards on 21 carries for the game.

Gavin Perry-Koci and Case Singleton both picked up first downs for the Bobcats before Perry-Koci scored on sweep around right end from the 16. Ty Butler kicked the point after, and Orangfield led 7-0 with 5:11 gone in the first quarter.

The Cardinals and Bobcats exchanged fumbles with Kayden Kibodeaux the former Bobcat returning a fumble for Bridge City to the Orangefield 9 yard line. The Bobcat defense then came up with a huge take away as Kane Smith intercepted a pass and returned it 97 yards for an Orangefield touchdown that made the score 14-0 with 3:16 left in the first quarter.

Bridge City moved the ball better on its next possession getting its initial three first downs of the game. Quarterback Hutch Bearden ran for one of the first downs and completed passes for the other two.

The Cardinals were eventually forced to punt and they pinned the Bobcats back at their nine-yard line. A holding penalty caused Orangefield to attempt a punt from inside its 10-yard line and the snap went over the punter's head for a safety to get Bridge City on the scoreboard with 6:51 left before halftime.

There was no further scoring in the first half, and the teams went to their locker rooms with Orangefield leading 14-2. The Bobcats deferred to the second half to receive the kickoff and it proved decisive.

Dischler busted the kick return for 54 yards being tackled by the last Cardinal at the Bridge City 35. Nine running plays by the Bobcats led to a fourth-and-goal from the two where Dischler followed three or four blockers around the left side into the end zone for the touchdown. Orangefield led 21-2 with 5:53 left in the third quarter.

Another Cardinals turnover proved costly for them as on the ensuing kickoff the ball was fumbled and recovered by the Bobcats' Beau Elkins. It took Orangefield three plays to score as Brayden Parker completed a 6-yard pass to Morgan Sampson in the end zone to make it 28-2 with 4:18 to play in the third period. 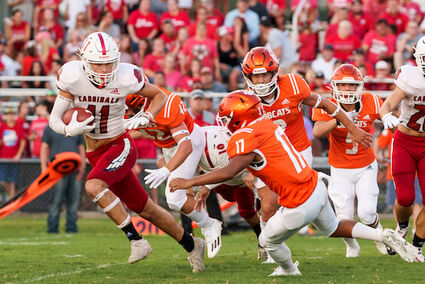 The Cardinals were able to get the last hurrah when they drove 50 yards for their only touchdown of the game. Bearden completed a fourth down pass to Cale Breaux for 23 yards that cut the final score to 28-9 after the point after by Victor Hernandez.

Case Singleton was the leading rusher in the game with 45 yards on seven carries for the Bobcats. Jerris Brown had 13 rushes for 33 yards for Bridge City.

Orangefield plays at home in Week Two against Spring Legacy. Bridge City will play its first game on the new field at Larry Ward Stadium against the Buna Cougars.