Mustangs face the Bears on Thursday 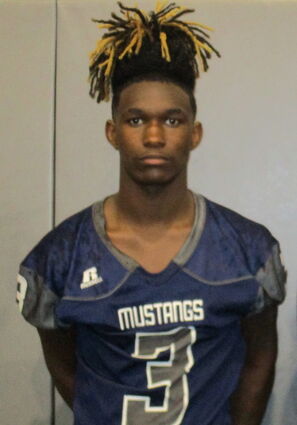 Coach Hickman went into his first game as the head coach wanting to stop the Bulldogs' running game. This strategy resulted in Nederland almost exclusively throwing the football which extended the duration of the game longer but netted the Bulldogs no points. "I thought we did a good job of stopping the run. My guys up front Ruben Ceaser, Isaiah Thomas, Andrew Wilson, and Ja'terraius Brown those front four guys did a really good job taking care of the run, and then our secondary locked them down in the back when they passed," Hickman recounted.

The Mustang secondary almost had a couple of interceptions. Chris Jones had a great game at corner as did Jamaal Shaw at the other cornerback position. "All in all I think it was a great night for the Mustangs," Hickman reiterated.

Nederland deferred the ball to West Orange-Stark to open the game, and the Mustangs hit the field running. Shaw set the tone carrying the football for good yardage.

Quarterback Keyshawn Robinson had a good night with two touchdowns and about a hundred yards rushing. Hickman advised, "We also got to unleash little Raymond Mallett, Jr. He's been injured for the last two weeks. I think he had five carries for 91 yards and had a seventy-yarder called back. Around here we call him "The Bullett", and it was good to have him back."

West Orange-Stark should be right at one hundred percent personnel wise when it rolls into Bridge City on Thursday night for the game with Little Cypress-Mauriceville. The game will be the renewal of the Orange Bowl between the two crosstown rivals.

Hickman pointed out the Bears' offense starts with Da'Marion Morris and frequently ends with points going up on the scoreboard because of him. "He's a slippery guy. We got to see him last year, and we looked at some film. He jumps around, is great in space, we're going to have to account for that guy. Where ever he is we've got to account for him. He runs and receives, so when he's moving out as a receiver we need to know that," Hickman emphasized.

Jordan Pollack plays tight end and is a good blocker the Bears like to run the ball behind. Pollack can also catch passes from Dean Reynolds the quarterback.

Reynolds was called a gamer by Hickman. "He can run it and he can throw it so that's another guy we'll have to account for on their offense. They have a big offensive line. It'll be a good challenge for us," Hickman analyzed.

The Bears align in a 4-2-5 on defense the Mustang scouts report. The big guy on the LCM defense is Amier Washington who is listed as a defensive end but may lineup anywhere across the front for the Bears.

Against Hardin-Jefferson in the season opener Hickman said LCM moved Washington up and down the defensive line putting him over the opposing center a lot. Hickman stated, "We need to know where he is. If they put him in the middle I promise you somebody will know where he is."

The Bears' other defensive end Jarves Riley may not make as many plays as Washington but Hickman will assign blockers to account for Riley too. "I've been watching film on them all weekend. These two guys can play," Hickman assured.

It is not unusual for West Orange-Stark to fill its non-district schedule with good teams from larger classifications. The Mustangs played 5A Nederland in Week One and now face the Class 4A, Division One, Little Cypress-Mauriceville this week.

The size or classification of the opponent is not important to West Orange-Stark. Hickman observed, "That's never really mattered to us. It does pose some challenges because they have a little more depth than we do. They don't have as many guys playing both ways as we do. This year we've been fortunate enough to have a little bit more depth on the offensive and defensive lines where those guys don't have to be two-way players which I think is going to benefit us in the long run going down the way."

The coach provided the fairly simple keys for the Mustangs to win this week. "Doing what we do, and that's how we've been since I've gotten this job. Last Friday was kind of the release. We've just been in here working, grinding, and getting prepared through the scrimmages. It was just fun to get out there and have a game and play and the kids executed which is what it's always going to come down to, blocking and tackling," Hickman reminded.

This week's game is non-district for West Orange-Stark but that does not mean it is any less significant for Hickman and the Mustangs. "Any time you have two schools in the same city it's just a natural rivalry. I think it's just a good country game. Here at West Orange-Stark we're a lot of people's rival. When you've won as much as we've won we're going to get everybody's best shot, and that's how we're going to treat it," Hickman concluded.

The Orange Bowl will be played at Larry Ward Stadium in Bridge City because the new artificial field at Battlin' Bear Stadium on the Little Cypress-Mauriceville High School campus is still being installed. The kickoff between the Bears and the Mustangs will be at 7:00 on Thursday night.