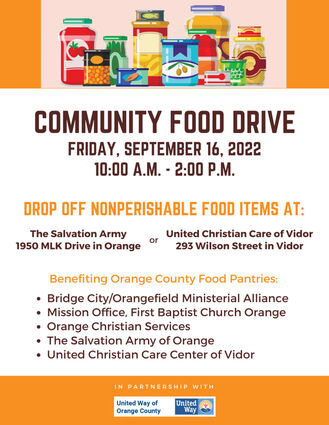 Air conditioners churned all summer to keep people cool, at least until their electric bills arrived. Gasoline prices soared during the summer. And grocery stores weekly raised prices on staples and all kinds of foods.

As people have been hit with inflation, they have cut back on their giving as they are paying more for the cost of living. Plus inflation coming after the Covid pandemic has edged more families and individuals into food insecurity. The food shelves in homes and charities are growing empty around Orange County as local aide groups struggle to keep people from being hungry.

The inflation also comes as the United States Department of Agriculture is ending a pandemic policy of providing free school meals at breakfast and lunch to all students, not just the ones from low-income families.

The United Way of Orange County is trying to help out by having a countywide food drive to collect non-perishable foods to distribute to five groups in all areas of the county.

The food drive will be Friday, September 16, from 10 a.m. to 2 p.m. at the Salvation Army, 1950 Martin Luther King Drive in Orange, and United Christian Care Center, 293 Wilson Street in Orange. Anyone may drive up to one of the two sites and leave food donations.

After the donations are collected, the food will be distributed to the Bridge City-Orangefield Ministerial Alliance, the Mission Office of First Baptist Church Orange, Orange Christian Services, Salvation Army, and United Christian Care Center in Vidor.

The U.S. Department of Agriculture reports food prices are up across the country an average of 8.5 to 9.5 percent. The July average food prices this year were an overall 10.9 percent more than July 2021. The food prices include groceries and restaurant foods. Grocery foods are up 13.1 percent in July this year compared to July last year.

As consumers are having to pay more out of their wallets for foods, they have slowed down on giving to food banks and other services to help people who are having financial problems.