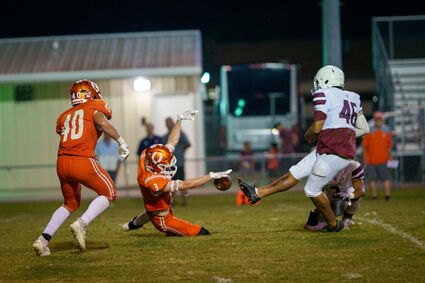 The Orangefield Bobcats played Legacy School of Sports Sciences last Friday night. The Bobcats had their hands full with the talented Titans dropping the game 40-30 at Orangefield.

Legacy is a private school from the Spring area that has won two state private school titles the most recent being last year. Orangefield stayed with Legacy until a late touchdown by the Titans opened up the final ten-point margin.

Orangefield Coach Josh Smalley was proud of the efforts given by his Bobcats against the very good Titans. "Legacy was a solid football which we thought watching them on film. They're big and fast, they've got two state championships since 2018. We went toe-to-toe with them for three and a half quarters. I thought our kids played well, and it'll do us good to see that speed and that kind of skill to get us ready for district," Smalley acknowledged.

The Orangefield offensive line showed a lot of improvement from Week One. The Bobcats rushed for 350 yards behind their young offensive linemen.

Leading the way was senior running back Cameron Dischler who carried the ball 21 times for 200 yards and three touchdowns. Dischler also returned a blocked Legacy point after kick for two points for the Bobcats.

Tailback Gavin Perry-Koci scored a touchdown for the second game in a row. Junior Mason Houghton had a 60-yard run for the Bobcats that set up the first Orangefield touchdown.

Orangefield's special team was better this past week too. Ty Butler was four for four on extra points and did a good job on kickoffs keeping the ball away from the dangerous Titan return men.

Linebacker Kyle Michael had his second interception of the season in the game. Defensive end Koen Maddox had a good game as well according to Smalley.

A question mark for this week's game will be two-way starter Morgan Sampson who had another player roll into his leg injuring a knee. Smalley said an MRI this week will show what the extent of Sampson's injury is.

The Bobcats will continue to play at home in Week Three this Friday against the Shepherd Pirates. Both teams are in the same classification Class 3A, Division 1, with identical 1-1 records.

Shepherd operates its offense out of the Shotgun usually with three backs. The Pirates are run heavy having thrown only seven passes with one completion in their first two games.

The Pirates want to get the ball in the hands of Hayden "HD" Green who normally lines up as the quarterback in the shotgun. Green is very fast and runs track in the 100-meter, but will shift to a wingback position in order to go out for passes from backup quarterback Devon Wyatt. Green is averaging 8.7 yards a carry and has two touchdowns on the season. Smalley warned, "He's a threat, anytime he touches the ball he could go the distance."

The other two Pirate backs are Preston Stephens and Tanner Lacey. Stephens has 79 yards rushing with two touchdowns Lacey is averaging close to five yards a carry in the first two games.

The offensive line includes tight end Landen Robbins who is a good blocker. Offensive tackle Erick Najera impressed Smalley with his blocking skills on the films of early games for Shepherd.

Smalley summarized the Shepherd running attack. "They use a lot of counter, a lot of mis-direction type stuff, real similar to us but the Pirates just do it out of the shotgun set instead of under center like we do. They're well coached at what they do. You've got to have your eyes focused on your keys or you'll get lost with their backfield stuff, but containing number one (Green) and not letting him get in the open field is going to be priority number one for our defense," Smalley indicated.

Shepherd bases out of a four-man front on defense. The Pirates use two inside linebackers to anchor their defense. Sheldon Ferguson is a junior and senior Tanner Lacey are both very good.

Defensive end Roman Gonzalez is solid for Shepherd. Safety Devon Wyatt will be dropped into the box to help stop the run but really does play all over the field for the Pirates.

The defense for Shepherd is very physical. Smalley described, "Very aggressive up front, a lot of attacking. They don't sit on the line of scrimmage and try to read anything, it is just straight up field, and they're coming to get you approach."

The Orangefield young linemen will be tested again with the attacking style of defense used by Shepherd. "Our job as coaches is to show them the best we can in practice what they're going to see Friday. It'll be a different challenge for us than it was last week against Legacy. Shepherd is a team that's pretty familiar with us. We've played them fairly recently so they've seen our offense it's not like Legacy that had never seen us before and had trouble with the mis-direction. The Pirates will be well coached up on us. Our challenge is up front stopping that penetration and that attacking style they use on defense," Smalley emphasized. 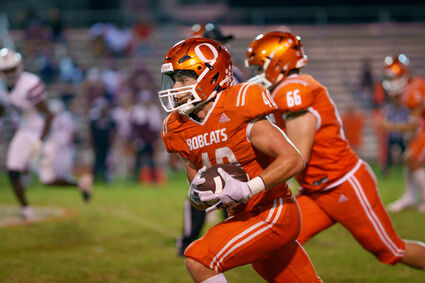 Orangefield Bobcat running back Cameron Dischler who carried the ball 21 times for 200 yards and three touchdowns. Dischler also returned a blocked Legacy point after kick for two points for the Bobcats.

The loss in Week Two for the Bobcats was against a superior Legacy team. Smalley evaluated, "Honestly, it wasn't lack of effort last week. We didn't turn the ball over offensively, we didn't have a whole lot of major penalties, so we played pretty well, we just played a pretty good football team that we couldn't keep up with their speed at times. We've just got to continue to improve."

This Friday night should be a game of two evenly matched teams in Orangefield and Shepherd. "Hopefully, we'll see a bigger improvement up front in the offensive line in Week Two to Week Three. Defensively, we've got to get off blocks and tackle better. If we can continue to get better up front, continue not to have turnovers, continue not to have penalties, we feel like we've got a really good shot to bounce back and get a win against Shepherd," Smalley concluded.

The Orangefield Bobcats will play its third home game in three weeks against the Shepherd Pirates on Friday. The kickoff will at 7:30 PM in F. L. McClain Stadium.