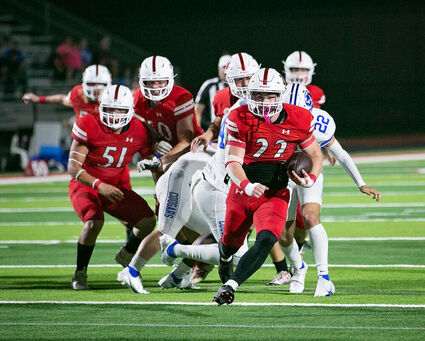 Bridge City Cardinal running back JS Bearden breaks loose to score in the 23-20 victory over the Buna Cougars.

The Bridge City Cardinals and their fans celebrated their first game on the new field at Larry Ward Stadium on Friday night. The celebration was almost curtailed by a spirited comeback by the visiting Buna Cougars, but the Cardinals prevailed 23-20 for their first win of the season.

The Bridge City School District held a special ceremony prior to the kickoff including a ribbon cutting in recognition of the new synthetic surface installed on Mo Litton Field at Larry Ward Stadium. It was first game for the Bridge City varsity team to play on the artificial turf.

The Cardinals played hard and with great emotion taking a 23-6 lead at halftime. In the second half Bridge City struggled to find any offense and were fortunate to hold on at the end to the victory.

Sophomore quarterback Hutch Bearden played wonderfully for the Cardinals in the first two quarters completing 6 of 9 passes for 108 yards. Hutch also ran the ball 12 times for 63 yards including a touchdown.

Bridge City and Buna were scoreless after one quarter. Early in the second period the Cardinals started a drive at their 43. Bearden completed a 14-yard pass to Noah Broussard for a first down to the Buna 40.

Bearden broke loose on a 20-yard run to the 20. After a short carry by Hutch, big brother JS Bearden took over and ran four yards to the 13 before scoring the initial touchdown of the game from there. Victor Hernandez made his kick to give Bridge City a 7-0 lead with 8:10 before halftime.

Next possession the Cardinals repeated the previous drive. Hutch completed first down passes of 12 and 10 yards to Gavin Bodin. Hutch ran 14 yards for a third first down to the Buna 11.

Another run by Hutch moved the ball to the three where JS punched it into the end zone for his second touchdown of the game. Hernandez made the score 14-0 with 4:19 to play in the second quarter.

The Cardinal defense had limited the Cougar offense to just two first downs to that point in the game. Quarterback Toby Marse completed three straight passes for first downs. The third was good for 27 yards to Gavin Theriot and a touchdown.

The point after kick was blocked by the Cardinals' Mason Pruitt who picked up the bouncing football and returned it for two points for Bridge City. The score was 16-6 with 2:11 left before halftime.

The ensuing kickoff went to Bridge City which started at its 37. On the first play Bearden passed to Bodin who made a very nifty run after the catch and the play netted 48 yards to the Buna 15.

JS Bearden carried the ball for 9 yards to the 6 from where Hutch executed the quarterback draw to perfection and scored with a 1:21 still to play in the half. The Cardinals went to the locker room in control 23-6 having scored on their last three possessions of the half, and they would receive the second half kickoff.

Things immediately went awry to start the third quarter. On the first play from scrimmage Bearden threw a pass directly into the arms of Buna linebacker Jaxson Sylvester for an interception.

The Cougars needed just five plays to get on the board. Marse completed two big passes to tight end Landon Stephens moving the ball to the one. Halfback Jacob Johnson scored on a short run. The pass attempt for two failed keeping the score 23-12 with a little over two minutes played in the second half.

The Cardinals appeared to have stopped Buna on its next drive but a personal foul penalty gave the Cougars a first down and new life. The Bridge City defense rose up again stopping Marse on a fourth down run one yard short of the first down marker at the Bridge City 33.

JS Bearden ran for 25 yards to move the Cardinals into Buna territory late in the third. Unfortunately, JS fumbled an exchange of a handoff and Buna recovered at its 15 yard line.

The Cougars used fourteen plays to drive 85 yards. Marse completed a 12-yard touchdown pass to Cayden Dill. Johnson ran the conversion in for two points and the Cardinal lead was down to three points with 8:48 to play in the game.

Bridge City got a nice run of 19 yards from Jerris Brown to the Buna 44 but the Cardinal drive stalled there and they had to punt back to Buna.

Taking over at their 31 the Cougars connected on a 27-yard pass from Marse to Stephens. Johnson ran 15 yards for another first down to the Cardinals' 27.

Pruitt of the Cardinals sacked Marse back to the 33. Two more plays had Buna facing a fourth-and-thirteen from the 30. That is when things got a little crazy.

Marse attempted to pass and was sacked again by Pruitt, or so it appeared. The referees had signaled a procedure penalty on the Cougars before the play started and thus Bridge City could not even decline the penalty as the ball was moved to the 35 still fourth down for Buna.

An even weirder circumstance occurred next as Marse wandered towards the Buna sidelines to apparently question the Cougar coaches the ball was snapped anyway rolling all the way past the 50 where it was smothered by several players from both teams. It appeared it would be Bridge City's ball there.

No it would not be the Cardinals' taking position. The referees ruled a penalty on the Bridge City Band for having been playing their instruments when the ball was snapped apparently inadvertently.

The ball was moved back to the 30 for another try at fourth down for the Cougars. Marse completed a pass to Dill who was stopped less than a yard from the first down at the 18.

The Cardinals needed to run three and a half minutes off the clock to secure the win. JS Bearden broke another long run of 36 yards to the Buna 45. He carried on the next play for 9 yards and things were looking good for Bridge City.

Then it went haywire again for the Cardinals as Hutch Bearden fumbled the long snap for a loss of seven yards. A short run by JS meant Bridge City would have to punt the ball back to Buna with still about 100 seconds left in the game.

The Cougars got the ball 69 yards away from a possible winning touchdown, and they almost got it on the first play. Marse threw a long pass to a wide open Carson Kondos who made the catch near the Cardinals' 30 with no one between him and the end zone. Kondos turned to run and literally fell down untouched.

Johnson ran the ball to the 26, but Buna committed penalties on the next two snaps moving the ball back to the 36 of the Cardinals. An incomplete pass and a short scramble by Marse had the Cougars facing another fourth down and fourteen at the 34. 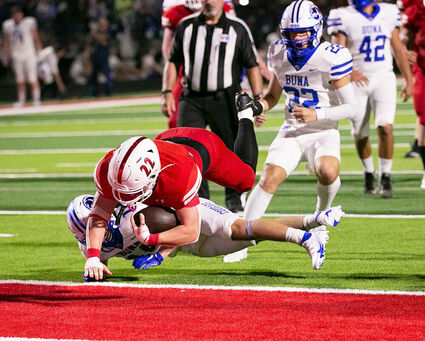 Bridge City Cardinal runningback JS Bearden dives over the goal line for a touchdown in the 23-20 victory over Buna.

Marse threw to Dill who made the catch near the sideline but could not cut up field and was stopped at the 21. Dill was one yard short of the first down again. This time the Cardinals were able to run out the remaining 22 seconds on the clock securing the thrilling 23-20 triumph.

JS Bearden was the leading rusher in the game with 116 yards on 13 carries with two touchdowns. His brother Hutch had 48 yards on 19 carries and one touchdown. Jerris Brown contributed 33 yards on six rushes.

The tale of two halves for Hutch Bearden throwing the football. After his 108 yards in the first half Bearden failed to complete a pass in five attempts for the second half and suffered the interception on his first throw of the third quarter.

The Bridge City Cardinals (1-1) play their cross county rivals the Little Cypress-Mauriceville Bears (1-1) next Friday. The game will be played at Larry Ward Stadium with the kickoff at 7:00 PM.