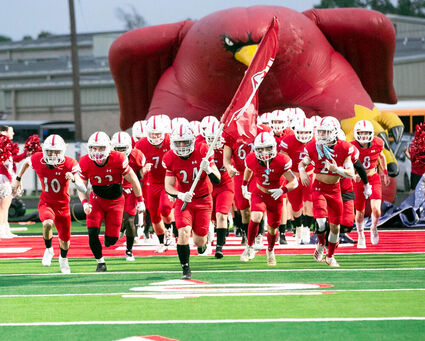 The Bridge City Cardinals played their first varsity game on the new artificial surface of Mo Litton Field at Larry Ward Stadium last Friday night. It was a thrilling and memorable contest for the Cardinals and their fans.

The Cardinals dominated the first half opening a 17-point lead against the Buna Cougars. Bridge City survived a furious Buna comeback in the fourth quarter as the Cardinals escaped with a 23-20 win over the Cougars.

Coach Cody McGuire admitted the end of the game had his heart beating faster than normal. "It's always better to win a game than lose. We told our kids they played a great first half, made a lot of mistakes in the second half, so we had a lot of teaching to do on Saturday to get ready to play LCM this Friday," McGuire acknowledged.

The coach recognized linebacker Mason Pruitt for continuing to be a defensive force in the middle for the Cardinals. Pruitt blocked a point after kick by Buna and returned it for two points for Bridge City which was the difference in the final score.

JS Bearden played great for Bridge City on both sides of the ball. Bearden scored two touchdowns and rushed for 116 yards to lead the Cardinals' offense.

Both the offensive and the defensive lines played lights out for Bridge City. The Cardinals secondary is young but are playing hard and will learn in the coming weeks according to Coach McGuire.

Kicking is an often overlooked aspect of the game. The Cardinal kicker Victor Hernandez was three for three on his point after kicks. McGuire replied, "Victor's solid, and he's always been a guy we can depend on. Last year he did a great job for us. He just continues to do that, and he works very hard at being a great kicker, and we appreciate having him on our team."

Much as the Cardinals do, the Bears use the Spread Offense. The Bears like to use 20-personnel in their Spread with two backs in the backfield.

Drawing the most attention from the Cardinals defense will be Bear halfback Da'Marion Morris. He is described by McGuire as an incredible athlete who runs downhill hard. Morris will also be used in the LCM passing game as a receiver.

The Pollock brothers Jordan and Jacob are both good receivers for the Bears. Jordan is a solid blocker at tight end.

Little Cypress-Mauriceville runs and throws the ball out of the Spread. "I think they're more run than pass. Morris is who makes them go. Their quarterback Dean Reynolds is very solid and does a great job as a field general running the offense getting people where they need to be," McGuire analyzed.

Formerly a Cardinal Kyler Garlaska has become eligible to play now for the Bears after changing schools. McGuire expressed, "He is a tough kid, a great kid, we really miss him, but it's going to be fun to play against him on Friday night."

The Bears base out of a 4-2-5 on defense which is very solid. Similar to Bridge City, LCM is young in the secondary but solid up front on defense.

The defense is led by Texas Tech commit Amir Washington at defensive end. McGuire did not mince words when expressing how physically tough Washington is, he is like a real bear for opposing blockers. The whole defensive line for the Bears is big and physical.

The Bear linebackers run to the ball well and the secondary is solid. "They're very well coached, and they play hard. It's going to be a great challenge but we're looking forward to it," McGuire replied.

The goal going into each game for Bridge City is to be the best conditioned and most physical team on the field that night. McGuire evaluated, "We want everybody being physical. We want our receivers blocking, we want our running backs blocking when they're not getting the ball, and we want our defensive backs, our linebackers, and D-line being physical. We feel like we've got a bunch of our guys doing exactly what we want and we've got guys working towards that. We won't ever reach our goal because you're always trying to achieve more, but you work for it every week, and when you continue to work for it good things happen."

Friday's game maybe a non-district game for Bridge City and Little Cypress-Mauriceville, but the rivalry goes back decades between the two schools. The Cardinals are going to give it their best shot and expect the same from the Bears.

Coach McGuire knows this kind of game will carry bragging rights for his Cardinals when they compete against the Bears in other sports or just see them on the streets. "It's very important. Our kids they grow up with these guys, they play baseball together. Their whole lives they've known each other, and so it's all about bragging rights in the county. It's huge for everybody so there will be a lot of people, it'll be a big crowd. Little Cypress-Mauriceville brought a lot of people to their game here with West Orange-Stark and they're very loud, and we expect the same come Friday night here again. They've got a lot of support and so do we. It's just going to be a fun game," McGuire concluded.

The Bridge City Cardinals will get after it with the Little Cypress-Mauriceville Bears at Larry Ward Stadium on Friday night. The kickoff is at 7:00.