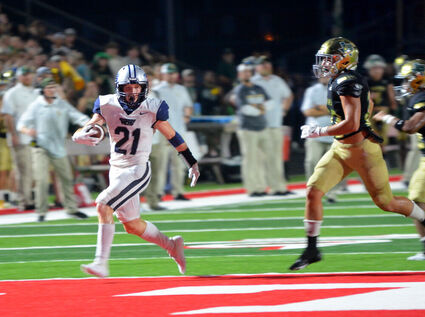 One of the more entertaining Orange Bowls was played Thursday night in Bridge City's Larry Ward Stadium. The West Orange-Stark Mustangs continued their dominance in the series with a 38-32 win over their crosstown rivals the Little Cypress-Mauriceville Bears.

Both teams scored five touchdowns in the contest. The difference was the Mustangs were successful on four of five two-point conversions while the Bears only made two point after kicks on their five scores.

West Orange-Stark (2-0) only has two losses in the four decades of games with the Bears. The Mustangs remain undefeated on the season with both wins against schools from higher classifications.

Little Cypress-Mauriceville (1-1) had the early lead in the game. The Bears could not maintain the 12-point advantage against the Mustangs.

After stopping the Mustangs on a fourth down run on their first drive, the Bears drove forty yards to score just over two minutes into the first quarter. Da'Marion Morris caught a pass for 20 yards that he took to the Mustangs' 10. Morris scored on the next play for a 7-0 Bears' lead after the point after by Danyon Craft.

West Orange-Stark responded by driving 55 yards in five plays for a score. Quarterback Keyshawn Robinson ran the ball three times for 43 yards the last 15 yards scoring the touchdown. Jailen Brown scored the two-point conversion from the Wildcat formation to give the Mustangs an 8-7 lead with 6:35 left in the initial quarter.

The Bears scored the third touchdown in consecutive possessions. This drive was 65 yards and eleven plays. Morris scored on a 4-yard run, and Craft kicked to make the score 14-8 with 54 seconds left in the first period.

LCM's defense forced another punt after three Mustang plays, and Morris returned the punt inside West Orange-Stark territory which was compounded by a major penalty on the Mustangs moving the ball to their 25.

It took Little Cypress-Mauriceville just two plays to put more points on the board as Dean Reynolds passed to Jacob Pollock for the 24-yard touchdown. The kick was just wide keeping the score 20-8 with 10:57 left in the second quarter.

The Mustangs rallied from that 12-point deficit to score their last three possessions of the first half. Raymond Mallett, Jr. returned the kickoff 33 yards after the Pollock touchdown to give WOS great field position at the Bears' 47.

A pass interference call against the Bears and a 21-yard pass reception by Nicholas Crosson gave the Mustangs a first down at the 15. Two runs by Jamaal Shaw gave them a touchdown with Brown converting the two-point run to narrow the LCM lead to four points with 9:16 left before halftime.

The only turnover of the game occurred when the Bears' fumbled on their second play of the next series, and Carlton Simien , Jr. recovered for the Mustangs. Two incompletions appeared to thwart the scoring opportunity, but Shaw ran for a first down before Justin Helm scored on the next play from the 12 for the Mustangs. Noseguard Andrew Wilson was inserted as a wingback and scored on the two-point conversion to give West Orange-Stark the lead again 24-20 with still eight minutes left in the second quarter.

The Bears threatened to score their next time with the ball driving inside the Mustangs' 30. Reynolds completed a pass to Elijah Allison that gave the Bears a first down at the 26. Morris may have been injured previously on the drive and was not used on any of the next four plays which netted only one yard resulting in a turnover on downs to the Mustangs.

Robinson was superb in the closing drive of the half for West Orange-Stark. He completed three passes for 39 yards and ran three times for 38 yards the last 16 of which were for a touchdown that put the Mustangs up 32-20 at the half.

Little Cypress-Mauriceville answered the bell in the second half ready to make a game of it. A personal foul penalty on the Mustangs gave the Bears a first at the WOS 45. Reynolds passed 11 yards to Jacob Pollock for another first. Reynolds threw a pass to Allison for a first down, but Allison eluded a couple of Mustang defenders and sprinted the remaining twenty yards for a 33-yard touchdown. A bad snap foiled the point-after for the Bears keeping them behind by six points 32-26 with 9:31 left in the third quarter.

Morris asserted himself again late in the third when he returned a WOS punt 20 yards which had a penalty on the Mustangs tacked on that moved the ball to the Mustangs 11.

A bad snap on first down moved the Bears back to the 22. LCM got that back two plays later when the Mustangs were flagged for defensive holding and an automatic first down at the nine.

Three running plays setup a fourth-and-goal at the two for the Bears. After a timeout Reynolds took a snap and went in practically untouched on a quarterback draw for the touchdown. With a chance to take the lead for LCM the point after kick was partially blocked keeping the score tied 32-32 with 9:42 left in the game.

The Mustangs got the ball and faced a fourth-and-two at their 44. The Wildcat which had been so successful on the two-point conversions was called and Brown broke loose for 12 yards and a huge first down.

Brown ran two more plays moving the ball 34 yards to the Bears' 10-yardline. Mallet got a first down run to the six. A fumbled snapped by the Mustangs lost nine yards, but Shaw got it all back with a 9-yard run before he carried again for 5 yards to the one. 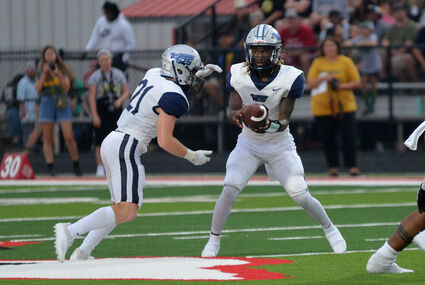 West Orange Stark running back Dustin Helm takes the hand off against the LCM Bears in Orange Bowl football action.

On fourth-and-goal the Mustangs called another of their two-point conversion plays snapping the ball directly to Wilson who was a wingback and he bulled into the endzone for the go ahead touchdown. The Mustangs were stopped on their try for two, but had the lead 38-32 with just 3:53 left to play.

The Bears had one more chance but on fourth down the Mustangs' Darren Anderson made a nice break on the ball and knocked down Reynolds' pass. The Mustangs then ran out the clock.

Morris led all rushers for the two teams with 91 yards on 21 carries and his two touchdowns for the Bears. Robinson was the leading ground gainer for the Mustangs with 8 carries good for 88 yards also with two touchdowns. Robinson completed 5 of his 11 passes for 64 yards. Reynolds of LCM was 9 of 15 passing for 147 yards.

West Orange-Stark plays next Friday at home against the Port Neches-Groves Indians with the kickoff at 7:30 PM. Little Cypress-Mauriceville will play again at Bridge City next Friday against the Cardinals. The kickoff is at 7:00 at Larry Ward Stadium.