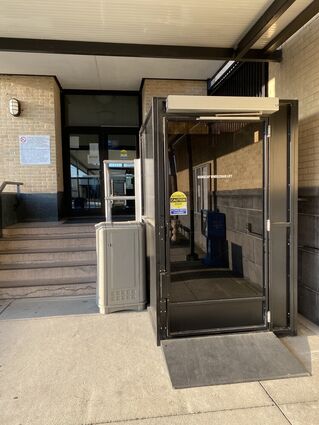 Guidry said the lift was needed because of recent changes at the courthouse, which houses judicial courts, the district attorney's office, plus other county offices. The front of the courthouse has been blocked off for several years because of problems with the marble facade staying in place.

Two wings on the courthouse were added in the early 1960s. The east wing has the county clerk's office and the west wing has the district clerk's office. The back parking lot offered ramp entrances to both of those wings that allowed wheelchairs and walkers access to the main courthouse. However, those doors were recently permanently locked for more security.

The changes made the back door to the courthouse the only way into the building and it has steps. Guidry said he bought and placed a small ramp that allows people from the parking lot to go up onto the curbed sidewalk that goes between the backdoor of the courthouse and the sheriff's office.

The new wheelchair lift is at the backdoor allowing entry into the courthouse. Guidry also explained how the county has handicapped parking for vans near the backdoor.

In an update on hurricane repairs during the past few years, Guidry said bids have been awarded and work is to begin on October 10 for roof repairs to the administration building and the county jail as part of Hurricane Harvey repairs. He also said a new contractor is set to continue repairs after Hurricane Laura that include the Raymond Gould Community Center in Vidor.

County Engineer Corey Oldbury gave commissioners an outline of how he and the personnel director have reorganized the Road and Bridge Department. Each precinct crew will now be under the direction of the road supervisor, rather than individual precinct foremen. He said the change should give the foremen more time for other jobs.

The road and bridge department currently has 11 vacancies with three in the mechanics shop. Oldbury said the county is having to send some trucks out to get repairs because of the shortage.

In addition, Oldbury reported the East Roundbunch Road swing bridge was opened and closed 63 times last month. He expects those openings and closings to increase as more barges come through.

Airport Director Missy Pillsbury presented the annual RAMP grant from the Texas Department of Transportation used at the county airport. TxDOT provides $100,000 and the county has a $100,000 share for improvements and repairs. The court approved applying for the grant.

The court also approved applying to the Governor's office for the 2023 Bullet-Resistant Shield Grant for the four county constables.

Also, the court approved renewing an interlocal contract with the city of Pine Forest to provide a county vehicle for law enforcement.

Other routine business included extending an annual interlocal agreement with the Orange County Port District to lease property from the port. The county has been leasing an old navy base building since Hurricane Harvey in 2017. The remodeled building has been used to house out-of-town volunteers who have come to here to help repair hurricane damaged homes.