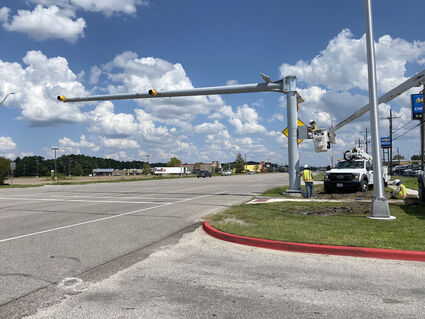 The Texas Department of Transportation has completed the construction of sidewalks along MacArthur Drive and has installed two overhanging caution lights for pedestrian crossings. The project included adding street lights along the sides of the seven-lane roadway that is part of Texas Highway 87.

TxDOT spokeswoman Sarah Dupre said contractors and Entergy are working to run electrical lines so the lighting can be turned on.

People in Orange, along with city officials, worked with TxDOT to get lighting on the commercial strip after a mother and her child were killed while crossing on a dark night in November 2015. Ava Nicole Lewis, 25, and her 6-year-old daughter, Lamya, were hit by a car as they tried crossing the street by a shopping center in Pinehurst over to the southside, where they lived in West Orange.

Previously, a 2-year-old girl was killed and her mother was seriously injured as they were hit in December 2011 while trying to go from Whataburger in Pinehurst to the West Orange side

MacArthur Drive itself is in the Orange city limits, though it is a state highway. The north side of the roadway is in Pinehurst and the southside is in West Orange.

The overhanging caution lights will blink yellow and have road signs instructing drivers to yield to pedestrians. The overhanging lights are installed at Donnell Street near the Salvation Army store and Henrietta Street by Granger Chevrolet.

In addition, TxDOT is working on Interstate 10 and 16th Street, which is also part of Texas Highway 87. The department has spent the past few years expanding the lanes on the interstate, installing new overpasses at 16th Street, and reworking the 16th Street intersections with the interstate access roads.

Dupre said currently multiple crews are working on the project limits from Adam's Bayou all the way to the Louisiana state line,

One crew is working west to east widening the pavement between Adam's Bayou and SH 87. The project includes reworking the base, treating the base, sealing and then topping it with concrete pavement.

Another interstate crew at working where 16th Street crosses under will begin fast track concrete paving so that the center pavement can be completed. Once the center portion of concrete paving is complete 16th Street (Texas 87) northbound traffic will be moved over onto the new pavement so that crews can begin work on the third phase of this intersection to complete, she said.

The crews dedicated to the Little Cypress Bayou and Sabine River Relief Bridges are waiting for the relocation of two fiber optic lines. Dupre said the crews are eager to get started on this work so that the entire eastbound segment from 16th Street to the state line can be finished.

Last week, the eastbound ramp at Simmons Drive was completed and TxDOT opened the ramp. Also last week, Ramp 5, west of the 16th Street intersection, was opened for traffic. During this work to open, the traffic barrier between Adam's Bayou and Simmons Dr. was shifted over to provide drivers with a less confined drive for a mile of the project limits, she said.