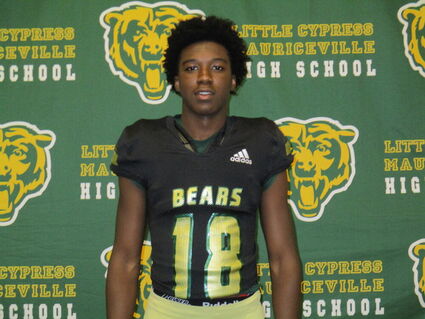 The old rivalry between the Little Cypress-Mauriceville Bears and the Bridge City Cardinals was renewed on Friday night. It was close a game for a half until the Bears scored the last 34 points to win 41-7 at Larry Ward Stadium in Bridge City.

Little Cypress-Mauriceville (2-1) was coming off a loss to its other big local rival West Orange-Stark last week. Bridge City (1-2) won its first game of the season last week and was looking to make it two straight victories.

The Bears wasted little time getting on the scoreboard scoring on their fourth play of the game. Facing a fourth-and-5 at their own 41 the Bears elected to go for the first down and got a spectacular touchdown from Da'Marion Morris on a 59-yard run. Lucas Wright kicked the point after to give LCM a 7-0 lead just sixty-two seconds into the game.

Later in the first quarter the Bears had an opportunity to add to their lead. Taking over at their 42 the Bears got first down passes from quarterback Dean Reynolds to Kyler Garlaska and then to Jacob Pollock moving the ball to the Bridge City 19.

The two teams exchanged penalties with LCM getting the better end of the deal resulting in a first-and-goal at the 10 after the Cardinal infraction. There the Bridge City defense stiffened.

A short run, an incomplete pass, and a sack by the Cardinals Mason Pruitt moved the ball back to the 15. On fourth down Wright attempted a 32-yard field goal but the kick was wide left.

Bearden completed a 13-yard pass to Cale Breaux sandwiched between two major penalties called on the Bears that moved the Cardinals to a first down on the LCM 14. Noah Broussard caught a 10-yard pass from Bearden.

That set the stage for Bridge City's JS Bearden to run for a first down to the one. His touchdown on the next play was wiped out by a Bridge City penalty, but it only delayed the celebrations for one play as JS ran the ball into the end zone from the six for six points. Victor Hernandez tied the game 7-7 with 10:58 to play in the second quarter.

The Cardinals avoided a disaster when a snap to punter Gavin Bodin sailed over his head. Bodin retreated about twenty yards to retrieve the ball and then boomed a kick that got a great roll all the way to the Bears' 29 for a punt of 37 yards but a difference of about 50 yards in field position if Bodin had not gotten the punt off.

Little Cypress-Mauriceville regained the lead midway through the second quarter. Morris ran 11 yards for a first down and the Cardinals were flagged for face masking moving the ball to the Bridge City 20.

Reynolds had one carry and Morris carried three times the last one from the two for the touchdown. Wright's kick made the score 14-7 in favor of the Bears with 4:38 before half time.

Bridge City threatened on its final drive of the half. JS Bearden ran for two first downs before his brother Hutch completed a 30-yard pass to Bodin for a first down to the Bears' 23.

Morris made the big defensive play intercepting a Bearden pass near the sideline to give the ball back to the Bears at their three with just 56 seconds left in the half. LCM got two first downs and got to Bridge City territory before the first half concluded.

The second half for Bridge City was almost a carbon copy of the last two quarters last week against Buna. The Cardinals got the second half kickoff and then had a pass intercepted by Jackson Smith of the Bears.

Seven plays and the Bears went up by two scores. Reynolds completed first down passes to Elijah Allison and Pollock. Morris ran the ball four times for 17 yards and scored the touchdown from the nine with 7:59 left in the third quarter.

Another golden opportunity presented itself for the Bears when Jonah Fuller recovered a Cardinal fumble on the kickoff. The Bears turned the ball over on downs after losing 12 yards.

JS Bearden ran 13 yards for a Bridge City first down at the LCM 29. It would be the only first down made by the Cardinal offense in the second half. One other first came on a Bear penalty.

Fuller made a nice deflection of a Hutch Bearden pass on fourth down to turn the ball back over to the Bears. Reynolds completed three first down passes to Garlaska, Allison, and Fuller before running 11 yards for a touchdown that put LCM up 28-7 with 2:18 left in the third period.

Reynolds and Allison hooked up for 61-yard touchdown with five second left in the third. Fuller replaced Morris at running back and scored the final touchdown from 10 yards out in the fourth quarter. 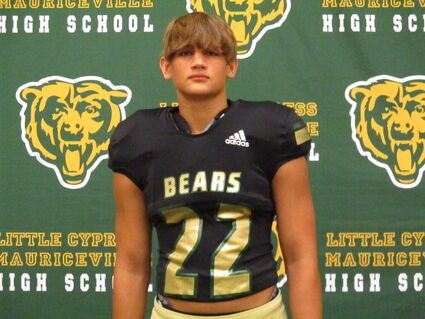 The Bears' Morris was the leading ground gainer with 141 yards on 18 carries and three touchdowns. Fuller carried the ball 8 time picking up 63 yards including his touchdown. Reynolds was 14 of 28 passing with no interceptions for 252 yards and the one touchdown. Allison had 7 receptions for 103 yards.

Little Cypress-Mauriceville travels to Houston next week to play Kincaid with the kickoff at 7:00 PM on Friday. Bridge City is on the road at Lumberton to play the Raiders with the game beginning at 7:30 on Friday.