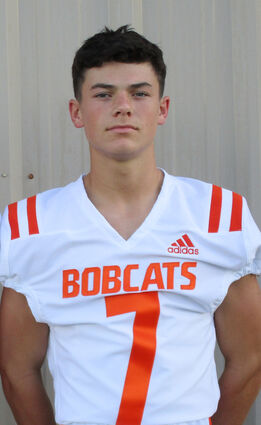 The Orangefield Bobcats improved their season's record to 2-1 with a win last week against the Shepherd Pirates. This week will be the first game of the season for the Bobcats not played at F. L. McClain Stadium in Orangefield.

The Bobcats defeated the Pirates 42-28 in what could be a preview of a possible meeting in the post season. Orangefield and Shepherd are both picked to be playoff contenders in their respective districts which play each other in the first round of the state playoffs.

Orangefield Coach Josh Smalley said it was a good win for the Bobcats. "We've still got a lot of areas we need to cleanup. The kicking game was good again for kicker Ty Butler. We didn't have to punt all night," Smalley recalled.

Running back Cameron Dischler of the Bobcats had his second straight great game rushing for 167 yards and two touchdowns against the Pirates. Junior tailback Mason Houghton gained over a hundred yards running and returned a punt over 80 yards for one of his two scores in the game. Smalley praised, "Up front we looked better, still improving and obviously we do have a long ways to go there with the young linemen."

On defense Leyton Loft was a leader for the Bobcats with 11 tackles. The Orangefield secondary also played well. "It was a good game for us all around. We turned the ball over twice, once on the three-yard line to give the Pirates a short field. We've still got some penalties we need to correct," Smalley summarized.

No new injuries for the Bobcats from the game with Shepherd. The MRI concerning Morgan Sampson's knee has not been fully released for Coach Smalley to review. Sampson's status is listed as questionable for this week's game as a result.

Friday night the Bobcats will play another school from the same district as Shepherd. The Woodville Eagles are picked also to be a playoff contender and possibly the district champions.

Woodville has gone from a ground and pound running team to a wide-open offense using the Spread. The Eagles will throw the football but they like to run it first.

The offensive line is big and talented. Braylon Rigsby and Tyler Limbrick are two of the best blockers for Woodville.

When the Eagles pass the ball Jacob Hyder and Christian Bean are the primary receivers. Smalley described, "The Eagles have gone from the Double Wing two or three years ago when they were three yards and a cloud of dust to now they're wide open. They run the counter and the zone read. The Eagles offense does a good job, they're very physical in the offensive line, and they've got good speed all over the field. It'll be a big challenge for us defensively."

On defense Woodville uses an even four-man front. The leader in the defensive line is Texas Tech commit Braylon Rigsby. At 280 pounds Rigsby is strong and physical while still being very agile for a player his size.

Wesley Walsh has impressed Coach Smalley with his mobility and being all over the field making hits. Walsh does a good job chasing plays down from behind.

Linebacker Kadan Williams is the Eagles' answer when things are not going well on defense. Williams blitzes frequently and makes plays behind the line of scrimmage for Woodville.

Smalley evaluated the Eagles on defense. "They're very physical. They're athletic outside wide enough that if you try to go spread with them they can man you up and speed wise stay with you. This allows the Eagles to keep six or seven in the box against the run. They only gave up 22 points to number one Franklin the first week of the season. They beat Newton and last week they beat Liberty, so they do a good job and they hang their hat on the defense," Smalley analyzed.

This will be the first road game of the season for Orangefield. The first game for many of the young Bobcats to have to get on the bus and travel to play an opponent could be intimidating. Smalley explained, "Any time you travel with a young group like we are, you worry about their head and their mentality on that bus. Last year we had a good group led by 18 seniors that knew how to handle things and had experience traveling. It'll be a little different this year so it's our job as coaches to kind of prepare them for that and let them know what it's going to be like getting there, how to handle and act on a bus ride."

This game is Orangefield's last tune up before district begins next week. "We're trying to see in this game will our kids keep competing. We feel like we've competed well in the three games we've played so far even in the loss to Legacy. Can we do the same on the road against a good football team that's proven how good they are with the teams they've played and the games they've won. If we can go up there and compete with those guys I'll feel good about it, and if we go up there and compete and get a win I'll feel even better about it," Smalley concluded.

The Orangefield Bobcats play the Woodville Eagles on Friday night. The kickoff will be at 7:30 in Woodville.