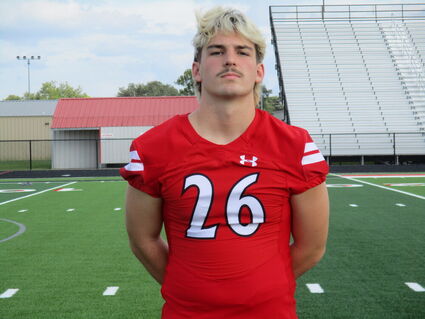 Noah Broussard of the Cardinals caught three passes against the Bears

The Bridge City Cardinals played an old rival last week and played them well for a half. This week the Cardinals play possibly their toughest opponent so far this season and on the road.

The Cardinals stayed close to their cross-county rival the Little Cypress-Mauriceville Bears through the first two quarters on Friday. Unfortunately, the second half just as it did the week before against Buna did not go well for Bridge City.

Running back JS Bearden scored sixty-two seconds into the second quarter to tie the game 7-7 for the Cardinals. The Bears scored late in the half to retake the lead by a touchdown going to halftime.

In the second half Bridge City could manage only two first downs and one of those was on a penalty against LCM. Quarterback Hutch Bearden was 6 of 12 passing for 75 yards in the first, but completed only one of five passes for one yard in the second half.

Mason Pruitt continued his excellent play at linebacker for the Cardinals on defense. JS Bearden ran the ball tough and gained 47 yards on 11 carries.

Coach Cody McGuire is concerned Bridge City has not played a complete game yet this season. "Our kids came out and played well just like the week before. We played a great first half, but we've got to put four quarters together if we do that we're going to be a really tough team," McGuire indicated.

Bridge City travels to Lumberton this week. The Raiders are a district opponent of Little Cypress-Mauriceville and are picked by several prognosticators to be the best team in that district.

On offense Lumberton operates out of the Spread. The Raiders throw the ball about sixty percent of the time with quarterback Lucas Powell who completed passes for over 2500 yards and 25 touchdowns last season. Powell also ran for ten scores.

Powell's favorite target is Brady Fuselier who caught 19 passes good for 434 yards and seven touchdowns in 2021. Another key receiver is Kaleb Koch as a position pass catcher. Trey Kersh is the Raiders' big playmaker on long passes.

When the Raiders want to run the football they have a big offensive line including seniors Jonathan Lamberth and Nick Woodland. They open holes for Jaddon Ward who is a load himself at 210 pounds. Ward rushed for 12 touchdowns and close to a thousand yards last year.

The Raiders are very solid with their multiple attack on offense. McGuire analyzed, "Their O-line is very, very good they get after you. They're just a solid team offensively."

Lumberton runs the same defensive alignment as Bridge City with the 3-4 odd man front. Senior inside linebacker Jared Morgan is the leader for the Raiders on defense with 82 tackles and two sacks in 2021.

Highly recruited by colleges on the outside at defensive end or outside linebacker is Brock Jackson who at 6-4 and 230 pounds is very fast. Jackson had four sacks and 16 tackles for losses with the Raiders last year.

At tackle is Grayden Spencer at 255 pounds. He must be moved if the Cardinals want to run the football.

Leading the Raider secondary is senior safety Carson Rea. He was Lumberton's leading tackler this past season. Broc Bonner is the other safety and is also very good.

The defense for Lumberton may take a back seat to the Raiders' offense but is very talented from the front line to the secondary. "They've got some dudes on that side of the ball, but they look very similar to us on defense and they get after it. They fly to the ball, so it'll be a great challenge for us," McGuire stated.

Coach McGuire scheduled his non-district opponents to help get his Cardinals ready for the quality of opposition they will face when their district games start in a little over a week. McGuire replied, "Our district's one of the toughest in the state with Jasper, Silsbee, and West Orange-Stark. We want to make sure we prepare ourselves so we're playing teams like LCM and Lumberton who are very good and quality opponents to prepare ourselves."

This week's biggest key for Bridge City to stay close to a team like Lumberton is for the Cardinals to play all four quarters. "We're a young team and our guys have got to learn how to play four quarters. We've got to clean up the mistakes like turnovers. We can't keep fumbling kickoffs, throwing interceptions, and stuff like that. We can't keep making those same mistakes, so that's the thing we want to be the most physical team every Friday night, but we also want to play mistake free football. We have been physical, we have been getting after people, but we've made a lot of mistakes in our first three ball games. Our kids are getting better and they're working hard every week so I'm excited about what we can do down the road," McGuire concluded.

The Bridge City Cardinals play the Lumberton Raiders on Friday night. The game begins at 7:30 in Lumberton.