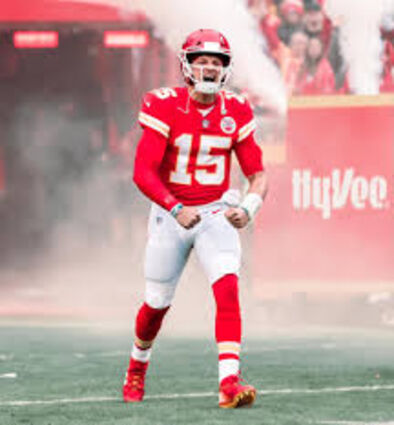 Mahomes threw for 360 yards and five touchdowns, zero interceptions and zero sacks. Actually, it was the third time he accomplished that feat. He completed touchdown passes on the first three drives of Kansas City's season and is the second quarterback to do that since at least 1991.

There was plenty of excitement in area college football games and even the two NFL franchises in Texas, but in the end of those games no football fans left their respective stadiums happy that their team won-except perhaps the Houston Texan faithful who saw their team play a 20-20 tie they were supposed to lose by more than a touchdown.

Although the 105,213 fans that crowded into the stadium went in with the notion they were going to see their Longhorns get blasted, braved the 100-degree heat and sat in the blazing sun for nearly four hours awaiting the inevitable.

The mighty Crimson Tide struggled in the first half and managed a touchdown and field goal which was matched by the 'Horns as the crowd sensed that Texas was either playing way over their heads or 'Bama was having one of their poorest showings. It proved to be a combination of both and roused the stadium full of 'Horn-lovers.

Texas managed only a field goal in the third period which was three more points than Alabama scored and the fans became electrified when Longhorns' place-kicker Bert Auburn booted a 24-yard field goal early in the fourth quarter, giving Texas a 16-10 lead.

'Bama scored a touchdown with 8:29 left to go ahead 17-16 which quieted the crowd just a tad, but when Auburn booted a 48-yard three-pointer with 1:29 left- the crowd smelled an upset in the making.

But 'Bama coach Nick Saban didn't run up a white flag but instead fired his offense up in those final 89 seconds as Heisman Trophy winner Bryce Young drove the football inside the Texas 25 to set up kicker Will Reichard and with 10 seconds left in the game he calmly was true on his 33-yard field goal that finally quieted the rowdy crowd of upset seekers as 'Bama won 20-19.

It was an entirely different scenario at College Station where Texas A&M was hosting small-college giant Appalachian State, who came to town as an 18½ -point underdog.

That didn't seem to bother the Mountaineers as much as their defense did the Aggies, who were held to a skimpy 189 yards of total offense compared to App State's 315 and only nine first downs while the visitors totaled 21.

The score was always close-although the visitors never trailed in the game-and if it wasn't for Aggie speedster Devon Achane's 95-yard kickoff return for a touchdown-would almost look lop-sided as A&M never crossed the goal line except once in the second quarter.

The crowd of 92,664 in Kyle Field was mostly subdued as they kept waiting for their heroes to break the game wide open.

But that never happened because the Aggies had the football for only 19 minutes, compared to 41 minutes for the Mountaineers.

The big difference-maker in the final 17-14 score was an App State 29-yard field goal midway in the fourth period. Aggie's kicker Caden Davis missed on a 47-yard field goal attempt with 3:43 left in the game.

The loss sent the Aggies tumbling from No. 5 in the AP College Football Rankings to No. 24 in this week's Top 25 Poll.

In the opening of the 2022 NFL season at NRG Stadium in Houston, the Texans hosted their division-nemesis Indianapolis Colts as an eight-point underdog. The Colts had manhandled Houston in their two meetings last year while Indy marched off and captured the AFC South Division flag.

But there was one bugaboo about these Colts-they have been unable to win a season opener for the past eight seasons. They have always had too many penalties, dropped passes and defensive glitches and ended up losing every time.

Sunday was no different as Indy played its usual mistake-filled opening game while the Texans looked like an entirely different team than the one that finished 2021 with a 4-17 record.

The Texans took a 10-3 lead into the dressing room at intermission and then doubled their score in the third period, going into the fourth and final quarter in command 20-3.

But in the fourth period the Texans of old re-appeared and gave up an early field goal and then two touchdowns, featuring the hard-running of NFL rushing champion Jonathan Taylor, tying the score at 20-20 with less than two minutes left in regulation play.

Quarterback Davis Mills completed 23 of 37 passes for 240 yards and two touchdowns-both to 6-6, 251-pound newcomer O.J. Howard-and zero interceptions. But in the fourth quarter and the overtime period, he was missing his targets badly, which stymied any offense.

Both teams played the final two minutes rather conservatively, not wanting to turn the ball over deep in their own territory and setting up an easy game-winning field goal or even touchdown.

Houston won the flip and took the ball first, without much success. The Colts were no better until two minutes were left in the overtime when they moved the ball to the Texans 19. But Indy quarterback Matt Ryan lost five-yards, setting kicker Rodrigo Blankenship up for the game-winning 42-yard field goal.

But the kick went wide, giving Mills & Company another shot at the victory. They moved the ball inside the 50, but on fourth and long Head Coach Lovie Smith decided to punt the ball and settle for a tie which brought a chorus of boos from the packed stadium who watched what seem to be a sure victory turn into a 20-20 tie.

Smith's decision not only provoked the fans but it sent football writers scratching their heads in disbelief. And for the Indianapolis Colts-they still haven't won on Opening Day.

Like the old adage says, playing for a tie is like kissing your sister. Lovie Smith must have a good-looking sister!!!

KWICKIES...Another disappointment for fans in the Lone Star State was the Dallas Cowboys Sunday night who were throttled 19-3 by the Tampa Bay Buccaneers and their quarterback Tom Brady. The worse news is that their stellar high-dollar quarterback Dak Prescott broke his thumb and will be out from six to eight weeks. He stunk up Idiot Owner Jerry Jones' Palace before leaving in the fourth period with the injury-or, he had it earlier and tried to play hurt.

The Houston Astros will have to wait another week or so before becoming eligible for the playoffs --like the LA Dodgers already have--and also winning the AL West Division. Going into Monday's action at Detroit, the Astros still had 22 games remaining in the regular season. Their 12-4 victory over the LA Angels was the 90th of the season, the 11th time in the franchise's 61-year history and the fifth time in the last six years. It also was manager Dusty Baker's 12th 90-win season in his 25 years as a manager.

JUST BETWEEN US...Kansas City Chiefs' head coach Andy Reid looked slightly perplexed during Sunday's postgame press conference after his team had disemboweled the Arizona Cardinals 44-21 when the football writers asked him why his quarterback Patrick Mahomes is so good in season openers. "He's pretty good all the time," Reid quipped. "We're lucky to have him." Mahomes threw for 360 yards and five touchdowns, zero interceptions and zero sacks. Actually, it was the third time he accomplished that feat. He completed touchdown passes on the first three drives of Kansas City's season and is the second quarterback to do that since at least 1991. The other was Green Bay's Aaron Rodgers in 2011.