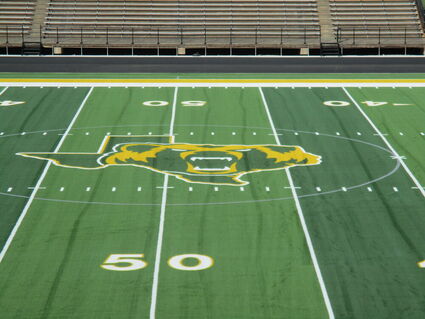 The new artificial turf at Battlin' Bear Stadium is installed and ready for the LCM Bears to play their first game on it Friday, September 30

This is the bye week for the Little Cypress-Mauriceville Bears. They will be preparing for their next game in two weeks against Legacy School of Sport Sciences out of Spring.

The Bears will have two weeks to put their last game behind them. Kinkaid a private school defeated LCM 23-6 in Houston last Friday. Little Cypress-Mauriceville is 2-2 on the season.

The bye week is not really an off week for the Bears according to Head Coach Eric Peevey. "One thing we're going to do as part of the bye week we'll be moving all of our equipment over to the football field. The new field is done and we'll be able to start practicing on it during the bye week. Everybody's going to bring their hard hat and gloves to take apart blocking sleds and equipment to get it to fit through fences and get it to the turf field," Peevey responded.

Practices on the new artificial turf at Battlin' Bear Stadium began this week. Peevey added, "We're really going to get our kids acclimated to the turf, getting used to playing on it. We go into a normal work week, so we'll start after giving the kids Monday off letting our coaches kind of get our game plan together for what we're going to be doing against Spring Legacy."

This week is a time for the coaches to review film or videos of the Bears' games played so far to prepare highlight reels which can then be sent to colleges to help the players be recruited to the next level of playing football. "We use this as a big recruiting week also, a grades recovery week," Peevey explained.

Tuesday, Wednesday, and Thursday the Bears held full practices against each other to get better at what they do. Peevey stipulated, "It's not as heavy or hard hitting, but it's a lot of mental reps during this period of time, a lot of little things that we need to work on, and use this week to heal up to get better mentally."

The big excitement for the Bear coaches and players during the bye is the first week of practicing on the new field. "Our kids and our community are just so excited, so I know that first home game is going to be homecoming anyway it's going to be a sold out crowd. I just see the community is excited for something shiny and new. It's been a while since Little Cypress-Mauriceville has had that. Mrs. Brister has had a great vision so far, and we're just excited to have that opportunity," Peevey concluded.

The Little Cypress-Mauriceville Bears play their next game which will be their actual first game this season at Battlin' Bear Stadium on Friday, September 30, against the Legacy School of Sports Sciences Titans. The kickoff for the game will be at 7:30 PM.