Mustangs lose close one to Newton 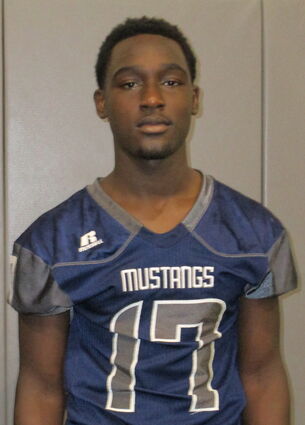 Marcus Turner, Jr. played most of the game at quarterback for the Mustangs against Newton and threw three touchdown passes

It was a seesaw battle between two good teams on Friday night in Newton. In the end the Newton Eagles grabbed a 24-21 win over the West Orange-Stark Mustangs.

The Mustangs took the lead three different times in the game. Each time the Eagles would answer with a score of their own. The difference in the game was points after touchdowns. Newton made two-point conversions on all three of its touchdowns, while West Orange-Stark kicked a point after once and failed on a run attempt after its final score.

Injuries were a key early for the Mustangs. Two way starter Jamaal Shaw was injured on the first offensive series for West Orange-Stark. He was replaced in the backfield by Jailen Brown and at cornerback by starting quarterback Keyshawn Robinson.

This led to sophomore Marcus Turner, Jr. taking over at quarterback for most of the remainder of the game. Brown was used as the quarterback in the Mustangs' Wildcat formation too.

West Orange-Stark drove 51 yards in eleven plays midway through the first quarter. Raymond Mallett, Jr. picked up a first down with two runs for 17 yards. Brown and Mallett gained 24 yards and two more first downs getting the ball to the Newton 10.

Two runs and a penalty on West Orange-Stark kept the ball at the ten. Turner threw an incompletion on third down before completing a pass to Nicholas Crosson for the touchdown with 54 seconds left in the first quarter. Jalen Gilmore kicked the point after to give the Mustangs a 7-0 lead.

A personal foul penalty proved costly to the Mustangs in the second quarter following a punt. The referees marked off 15 yards which gave the Eagles the ball at the West Orange-Stark 46.

Newton quarterback Maliek Woods gave the Eagles their initial first down of the night on a 24-yard run to the Mustang 15. Two penalties against the Eagles pushed them back to the 30.

A short run by Woods and two incomplete passes had the Eagles facing fourth-and-24. Woods heaved a pass into the right corner of the endzone where Railyn Adams outjumped a Mustang defender to grab the ball for the touchdown. Leighton Foster ran in the conversion for two points to give Newton the lead 8-7 with about 3:30 left in the first half.

An onside kick was recovered by the Mustangs near midfield, but they could not move the ball and punted it back to Newton. On the Eagles' second play Foster fumbled, and the Mustangs' Dakarion Judge recovered at the Eagles' 19.

On second down Turner passed from the 19 to Andrew Cooper for the touchdown. Brown ran the conversion in for two points to give the Mustangs a 15-8 lead 61 seconds before halftime which is how the half ended.

The second half started with three-and-outs by both teams. Newton's second possession of the half Foster ran for 14 yards to give the Eagles a first down at their 47.

Woods completed only his second pass to that point of the game good for 13 yards to Westin Gipson. On fourth-and-3 Foster picked up the first down for Newton. The next play Woods had his third completion of the night to Heicko Malone for 42 yards and a touchdown. Foster ran successfully for two points and the Eagles were back on top 16-15 with 5:47 left in the third quarter.

West Orange-Stark responded quickly. Three runs got the ball to the 50. A penalty moved the Mustangs back to their 45 where Turner tossed the ball to Darren Anderson who took it to the house for a 55-yard touchdown with 3:35 left in the third. The Eagles stopped Brown on a run attempt for two points, but the Mustangs had the lead 21-16.

Early in the fourth quarter the Mustangs had an opportunity to take a two score lead. They drove from their 39 to the Eagles' 25 with first downs on a pass to Cooper and a run by Brown.

The Newton defense stiffened there and Turner was stopped on fourth down trying to scramble for the first at the Eagles' 19. The Eagles took possession with 5:45 to play and 81 yards needed for the go ahead score.

Foster gained one first down on a pair of runs, and Tyler Porter picked up another one with two totes of the football. Fifteen penalties were called in the game, but maybe the biggest came next when the Mustangs were flagged for pass interference on a play where the ball was well overthrown and appeared to be uncatchable according to the West Orange-Stark coaches.

First down at the Mustang 39 seemed to rejuvenate the Eagles. Steady doses of Foster and Porter moved the ball deeper into Mustang territory. On fourth-and-three Foster gained a first down at the three by the length of the football. He scored on the next play and then ran in the two point conversion to give Newton a 24-21 advantage with just 1:28 left in the game.

The Mustangs executed four plays gaining only six yards to turn the ball over on downs to the Eagles. Newton easily ran out the clock to end the game.

Turner saw his most action in any game this season for the Mustangs. Turner completed 11 of 19 passes for 110 yards and three touchdowns. He carried the ball five times for 17 yards. Brown was the leading ball carrier for West Orange-Stark with 48 yards on 17 carries.

West Orange-Stark opens district play next week. The Mustangs play the Silsbee Tigers on the road.