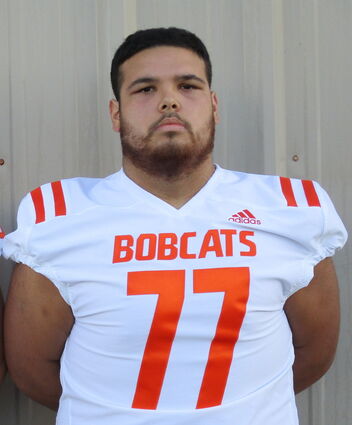 The district games start this week for Orangefield against an old rival. The Bobcats enter district play though coming off their weakest performance of the season so far.

The Bobcats travelled to Woodville and were beaten decisively by the Eagles 33-7. The loss evens Orangefield's record at 2-2 for the year.

The defeat to Woodville was a combination of several factors for Orangefield. The number one factor according to Bobcat Head Coach Josh Smalley is the Eagles are very good. "I think people forget they beat Newton a couple weeks ago, and Newton just beat West Orange-Stark this past week, so it's not like we lost to a creampuff. We lost to a pretty good football team," Smalley pointed out.

Smalley admitted Orangefield did not play particularly well in the first half as far as effort either. Smalley stated, "That got better in the second half, but me making an excuse for us takes the credit away from the Eagles, and I don't want to do that. They out coached us, out played us, and there is no shame in losing to a good football team."

The coach added the Bobcats missed a lot of tackles and their effort in their first road game of the year was not as good as it had been in the three home games that started the season. "Hopefully, our kids will learn from this, and have a little more focus and a little better attitude this week," Smalley expressed.

Standouts in the loss for Orangefield included running back Cameron Dischler who earned his 100 yards rushing and the lone Bobcat touchdown. Defensive lineman Diego Garcia setup the score with a fumble recovery that he returned to about the Woodville ten-yard line and Dischler scored on the next play.

The Bobcats played without running back Gavin Perry-Koci and two-way starter Morgan Sampson at tight end and defensive end. Perry-Koci should be back this Friday for the district opener. Sampson is seeing a doctor this week to determine if his knee injury will keep him out of the lineup again this Friday night.

The first game of district for Orangefield is against the Buna Cougars. The Bobcats and the Cougars have played each other for decades. Buna may be a bigger rival for Orangefield than even the neighboring Bridge City Cardinals because the two schools have played so often over the years.

Buna operates its offense out of the Spread Formation. The Cougars are a multiple offense running and throwing the football. Last week they scored 75 points against Kountze.

The key offensive players for the Cougars start with running back Jacob Johnson a junior. Johnson rushed for over a thousand yards and 13 touchdowns in 2021 for Buna and is having a similar year this season.

Quarterback Toby Marse is also a junior. Marse can run but is a very good passer for the Cougars with numerous receivers to throw the football.

Tight end Landon Stephens is a big target at 6-5, 280, to whom Marse does a good job throwing the ball. H-Back Isaiah Robinson is another large Cougar who is difficult to bring down after he catches the ball. Wide outs with speed are Gavin Theriot, Garrison Connell, and Kayden Dill.

The Cougars can put points on the board. Smalley analyzed, "They're athletic, they do a good job with what they do with their offense, they're big huge and physical up front probably the overall biggest team we've seen this year as far as size goes which gives us issues dealing with all that."

On defense Buna bases out of a 3-4 but will shift into an even four-man front. In last year's game the Cougars played most of the game against Orangefield using four downed linemen. Smalley and his coaches will work to show the Bobcats the different looks used by Buna.

In their first four games the Cougars have not really played a run heavy team like Orangefield. That is good news and bad news for the Bobcats since Buna will have to prepare specially for the Bobcats' Slot-T, but it also means Smalley has no film to see what the Buna coaches might do to prepare for the Bobcats and their run dominated offense.

The leader on the Buna defense is noseguard Reece Boyd. He is a fast and shifty lineman that penetrates across the line of scrimmage to make plays in opponent's backfield.

Safety sophomore Billy Robinson appears to be all over the field. Linebacker Kale Knox was a leading tackler for the Cougars the previous year, but has been missing from the Buna lineup the last few weeks. Replacing Knox at inside linebacker are Cooper Wolfe and Franklin Renfro, and Smalley said they both play well.

The Cougar offense is similar to their defense. "They're big up front. They're athletic in the secondary. The Cougars play well and don't give up a whole lot of points. Even the games they've lost have all been one score losses. It's going to be a challenge for us to move the ball," Smalley described.

It is important the Bobcats play better this week than they did last week. Smalley emphasized, "We've got to tackle better, and we've got to block better. Those are the two things that really stood out last week that we did not do very well at all. Our kids usually have a good tendency to bounce back after games like that and refocus which is our job as coaches to get them to do."

Buna made a head coaching change prior to the Kountze game. That new leadership has the Cougars playing inspired and ready to go.

Orangefield wants a win to start the district on the right foot. "This is a big game for our community, it's a big game because it is the first one in district, but it's even bigger because nobody likes the taste in their mouth after that loss last week and we need to get that taste out of our mouth," Smalley concluded.

The Orangefield Bobcats play the Buna Cougars on Friday night. The kickoff will be at 7:30 in F. L. McClain Stadium