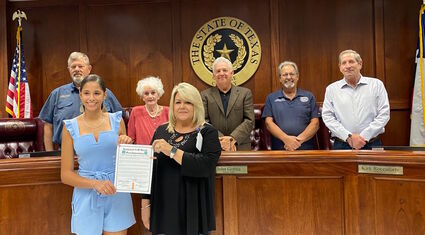 For the first time in five years, Orange County will be starting a new budget year with a surplus. County Judge John Gothia said no recent disasters and reimbursement payments from FEMA have created the financial success.

Orange County Commissioners Court unanimously approved the 2022-23 budget of $52.7 million. This year the county will begin the new fiscal year October 1 with $8.3 million in reserves. The savings will allow the county to buy new equipment that had been delayed because of finances.

For the past few years, the county had to get short-term loans to start the budget year until taxes were collected in January. The deficits were caused by the county spending money for disaster clean-ups after hurricanes and tropical storms. The county would spend the money for storm recovery and then file with FEMA to get reimbursed. Sometimes, those reimbursements were slow. In addition, the county had a problem getting FEMA help after Hurricane Laura in 2020 because it hit mainly in Louisiana and Texas was not declared a disaster zone.

The budget includes $43.9 million for the general operating fund along with $7.5 million for the road and bridge fund. Gothia said the county now has only about $410,000 in outstanding debts.

Gothia said commissioners also increased some basic pay grades to 80 cents an hour more. He said the job market here is competitive and the county has been having trouble attracting new employees and losing experienced employees to jobs with more pay. The budget also includes pension benefits along with health and dental insurance. The judge said keeping good benefits help keep employees.

The commissioners also approved the county's annual share for social services with $45,000 going to the Orange Community Action Association, which operates the Meals on Wheels program for senior citizens and shut-ins. Also $2,500 for Court Appointed Special Advocates (CASA), which helps children in the legal system. Other programs were $33,220 for Spindletop MHMR, the local state group for mental health; $500 for Southeast Texas Resource Conservation and Development; $800 to the city of West Orange for "no man's land fire protection;" $5,000 to the Garth House, which helps child victims of sexual abuse; $1,000 to the Lower Sabine Soil and Water Conservation; and $10,000 to the Julie Rogers Gift of Life program, which provides free cancer screenings and education.

Commissioners also issued a proclamation for National 4-H Week. Franny Woods of the county Agri-Life Extension Service, which sponsors 4-H, said the county has 145 4-H members with 113 students and 32 adults in five clubs. The group this year started a club for home-schooled students.

The program sponsors a number of activities for youth that draw in non-members. An archery group will be forming soon.

She said club members learn parliamentary procedures and conduct their meetings, along with taking minutes and keeping a budget. Groups also help with a number of community services, including harvesting sweet potatoes at the Field of Plenty to supply fresh vegetables to Orange Christian Services.

Rory Die, a 4-H member who is home-schooled, talked to commissioners about how the group has improved her life skills and thanked them for their support.