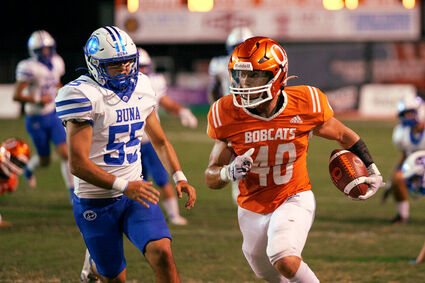 Cameron Dischler of the Bobcats rushed for 239 yards, two touchdowns, and even intercepted a pass to help Orangefield defeat Buna.

Orangefield stormed out of the gate, sagged in the middle, and closed with a big bang in its first district game. The Bobcats defeated the Buna Cougars 28-14 on Friday night at F. L. McClain Stadium in Orangefield.

The Bobcats (1-0, 3-2) dominated the first half and enjoyed a 21 point lead with less than five minutes left in the second quarter. The Cougars (0-1, 1-4) took advantage of a turnover early in the third quarter to cut the margin to seven points but could not get any closer.

The star of the game was Bobcat running back Cameron Dischler who had 27 carries for 239 yards on the night. Dischler scored two touchdowns including a clinching fourth quarter sprint down the Orangefield sideline for 67 yards that restored a two score lead for the Bobcats with less than ten minutes left in the game.

The game started like Orangefield would have a walk, or maybe a run, in the park as the Bobcats scored on their first three possessions. The Bobcats executed 24 plays all but one on the ground netting 13 first downs and 186 yards.

The Bobcat defense held Buna on its opening possession giving Orangefield the ball at the Cougars' 46. Four running plays covered that distance with Gavin Perry-Koci rushing the last 13 yards for the touchdown. Ty Butler kicked the point after and it was 7-0 with 3:14 ticked off the clock.

The Cougars managed a first down but then punted again to the Bobcats who took over at their 27. A penalty pushed them back to the 17. Dischler gained four yards but a face mask penalty on Buna gave Orangefield a first down at the 33.

Dischler had first down runs of 4, 17, and 19 yards to get the ball to the Buna 12. The next play Dischler scored with 1:01 left in the first period. The kick was missed and the Bobcats led by 13 points.

Three straight first down runs by Buna's Jacob Johnson moved the Cougars from their 20 to the Bobcat 20. Orangefield tackled Brennan Hippler for a two yard loss before two pass incompletions setup fourth-and-12.

Buna elected to go for it with a pass. The Bobcats' Jackson Humplik stepped in front of the Cougar receiver making an interception which he returned about 20 yards to spoil the scoring opportunity for Buna.

The ground and pound started again for the Bobcats. Orangefield quarterback Brayden Parker rushed for 13 yards on the first play. Three more runs only gained four yards. Facing fourth-and-six at the 50 the Bobcats gambled with a fake punt using a direct snap to up-back Kyle Michael who got the first down plus an extra yard to the Buna 43.

Singleton ran right on the next play shrugging off a couple of tacklers to find the end zone. Dischler ran in the two-point conversion to make the score 21-0 in favor of Orangefield with 4:44 left in the half.

Seeing the success of their last drive with Johnson running the ball the Cougars went back to the same strategy. Johnson carried three consecutive plays for 34 yards and three first downs.

The Bobcats stopped Johnson for a two-yard loss. Marse threw a beautiful pass to Kayden Dill who caught the ball in stride to score on a 30-yard touchdown. The point after made the score 21-7 with 2:44 to go in the second quarter.

Time was a factor as Orangefield was able to move from its 37 to the Buna 36. With just seconds left Dischler broke loose off of left tackle but the Cougars were able to corral him at the 10 as the half ended.

The second half started with Orangefield receiving the football. Three runs gave the Bobcats a fourth-and-three. Dischler got the ball however could only get two yards, and Buna took over at its 45.

Hippler subbed for Johnson and gained some good yards running seven times for 24 yards. A personal foul penalty on the Bobcats gave the Cougars a first down at the 18.

Orangefield made a big stop on Hippler's seventh carry stopping him for a two-yard loss that made it fourth-and-five at the Bobcat 13. Marse completed a quick look in pass to Garrison Connell but the Bobcats swarmed the Cougar stopping him two yards short of the first down.

The Bobcats looked like they had dodged a big bullet until their next offensive play. An errant pitch back from Parker to it appeared intended for Dischler rolled back into the end zone where the Cougars' Carson Kondos scooped it up for an easy Buna touchdown to pull the Cougars to within seven points of the Bobcats.

The next series the Bobcats were still stuck in reverse losing four yards on three plays and were forced to punt the ball to Buna. The Cougars took possession with a short field starting at the Bobcats' 49.

Three good defensive plays by the Bobcats were spoiled by another unsportsmanlike penalty against Orangefield. Fifteen yards were marked off giving Buna a first down at the Bobcat 26.

What could have been the play of the game followed as the Cougars lined up in the Wildcat formation with a direct snap to Johnson who then pitched the ball to Marse who threw to a wide open Korbin Pennington for an apparent tying touchdown. Buna was flagged on the play for an illegal forward pass possibly because Johnson had tossed the ball forward instead of laterally to Marse before he passed the ball forward to Pennington.

Another bullet had just missed the Bobcats. Two plays later Marse tried to throw long but Dischler intercepted the pass at the four.

Dischler gained 12 yards on third down after his interception, and Perry-Koci pushed and pulled his way for 16 yards as the Bobcats got some breathing room out to the 33. Dischler allowed everyone on the Orangefield side to take a deep breath breaking loose around left tackle and going to the house 67 yards for the clinching score with 9:43 left in the game.

Buna did not throw in the towel. The Cougars used Johnson to pickup two first downs moving the ball to the Bobcat 39. There it was the Bobcats' defense that stood strong with first Humplik making a big stop on a run by Marse on third down before freshman Mason Manning knocked away a Marse pass in the end zone to turn the ball over on downs to the Orangefield offense which ran off the last 4:42 on the game clock.

Orangefield won the game with its Slot-T picking up 353 yards on the ground. Dischler was the top rusher with 239 yards, but strong contributions were made by Perry-Koci with 68 yards and Singleton with 37 yards.

Buna was led by Johnson who carried the ball 16 times for 151 yards. Hippler had eleven rushes for 27 yards. Marse was 3 of 9 passing for 42 yards while suffering two interceptions. 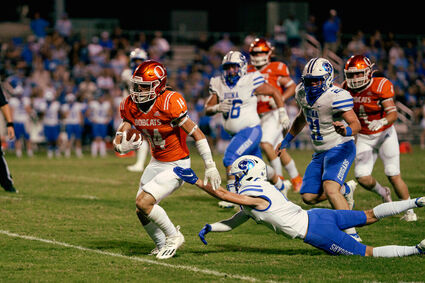 Orangefield's Gavin Perry-Koci leaves a trail of Buna defenders in his wake as he breaks open for a big gain against the Cougars.

Orangefield travels to Anahuac next week. The Bobcats and Panthers are tied at 1-0 in district. Buna plays at home against Kirbyville.