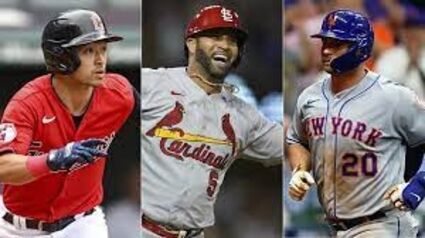 It doesn't matter whether it's high school, college or pro football, basic long-range trends can be observed after the first three games of the season.

High school and college teams are more difficult to figure because most teams have cupcake opponents during the first month of play.

But that's not what happens in the NFL where schedules are figured by factors such as travel distance and future weather conditions in cities where fall weather is extremely hot and humid and weather can be cold and bleak during the last month of the season in cities that don't have indoor facilities for football.

In area high schools, regardless whether the football team had success in the state playoffs the previous year or not, those first three games can be an earmark of what can be expected once the district competition begins.

Although the West Orange-Stark Mustangs have a brand-new football coaching regime for 2022, much of this year's schedule was put in place by retired head coach Cornel Thompson with the second half of home-and-home series scheduled for predistrict games. And there definitely weren't any powder-puff opponents.

And after three games, it became apparent the Mustangs would have a difficult time dominating their district like they had for so many years and decades.

Silsbee popped into the district picture and got the state ranking that WO-S had held throughout their magnificent run. And the relatively easy 48-27 Silsbee victory over the Mustangs in Friday's District 9-4A's opening game verified the fact the Tigers may take over as the league kingpins.

The Little Cypress-Mauriceville Battlin' Bears were coming off one of their most impressive seasons in school history but had a problem by having to play some home games on "foreign" fields because their new turf wasn't ready when the season started. They play their first game at home on the new field Friday against Spring Legacy School.

Our two area colleges-Lamar and McNeese State-had a difficult time chalking up that elusive first victory, with the Cardinals still in search of it while the Cowboys broke into the win column with a 32-17 triumph over Mississippi College Saturday night in Cowboy Stadium. Their three-game starts indicate both might be fighting for the Southland Conference cellar.

The NFL just completed the first three weeks of its 2022 schedule and I've seen several trends develop during that time with various teams.

Our Houston Texans would be undefeated if they could only count the first halves of their three games against Indianapolis, Denver and Chicago.

But the Texans have a way of making several second-half blunders and as a result are one of the only two winless teams. The Las Vegas Raiders are the other.

In Sunday's game at Chicago, the score was tied 20-20 in the final two minutes and Houston was driving to get in place for the winning field goal.

Second-year quarterback Davis Mills was right on the money, approaching field goal territory and eating up the seconds on the clock.

Then instead of firing a pass to a wide-open Rex Burkhead out of the backfield, Mills lobbed the ball and Bears linebacker Roquan Smith came out of nowhere for an easy interception.

The Bears got into perfect field goal position and then wisely went into victory formation until one second remained in regulation and kicked a chip-shot, game-winning field goal.

My observation is that teams with new, young quarterbacks or a new head coach or both are the teams that didn't fare well in their first three games.

There are some exceptions to this hypothesis-undefeated Philadelphia with new quarterback Jalen Hurts (from Channelview), 3-0 Miami with quarterback Tua Tagovailoa and usual cellar-dweller Jacksonville (2-1) with second-year quarterback Trevor Lawrence and new head coach Doug Pederson in his first year with the Jaguars.

It's too early to know about the Dallas Cowboys after losing star quarterback Dak Prescot, Minnesota which is trying to blend in their many new faces, Indianapolis which has received a spark from veteran quarterback Matt Ryan, Cleveland and Baltimore.

Denver has the potential to have a winning team, but their biggest stumbling block in my opinion is new Head Coach Nathaniel Hackett, who seems to be afraid to open up the offense and let quarterback Russell Wilson do his thing. The Broncos' defense is fine.

Washington, Detroit, Seattle, Atlanta, Carolina, Pittsburgh, Cincinnati and New England have a chance to turn things around and work their way into playoff contention.

There doesn't seem to be much hope for the Houston Texans. If they don't have a complete turnaround, they could be 0-16-1 when the snow flies.

KWICKIES...The Texas Aggies staved off a fourth-period rally Saturday and defeated 10th-ranked Arkansas 23-21 in Jerry Jones' Palace at Arlington. They are prepping for their game against Mississippi State in Starkville, MS. Saturday as a two-point underdog, according to the early line.

Atlanta Braves ace Kyle Wright became the major league's first 20-game winner when his team defeated the Philadelphia Phillies 6-3 Saturday. Wright didn't allow a hit until there was one out in the bottom of the sixth inning. He was the first Braves pitcher to win 20 games since Russ Ortiz won 21 in 2003.

This week's Top 25 College Football Poll had no changes in the first five teams and saw No. 6 Oklahoma drop to No.18 and replaced by seventh-ranked USC, Kentucky up one to No. 7, Tennessee up three notches to No. 8, Oklahoma State remaining No. 9 and No. 10 North Carolina State, which jumped up two places. Baylor moved up one place to No. 16, Texas A&M moved up six spots to No. 17 and Texas fell out of the Top 25.

JUST BETWEEN US...The Houston Astros have reached that magical 100-win plateau as expected and need three more wins in the remaining eight games to clinch homefield advantage in the upcoming American League playoffs. They returned home from Camden Yards with a split of the four-game series with the Baltimore Orioles, after being shut out in the first two games and needing extra innings Saturday and Sunday to gain the split. Houston opened their series with the Arizona Diamondbacks last night at Minute Maid Park.