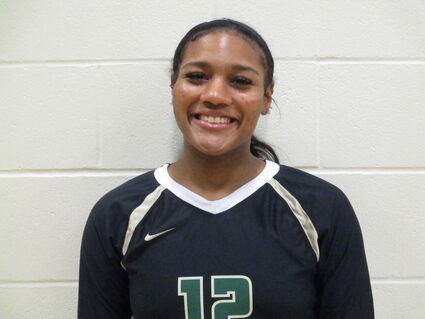 The first two sets were dominated by the Lady Bears with LCM winning 25-6 and 25-9. The third set was a little closer with a final score of 25-16.

Chrissy Joseph was the leader for the Lady Bears with 9 kills followed by Lindi Perry with five. Ava White served 5 aces to lead Little Cypress-Mauriceville. Hallie Maddox was tops with 21 assists. She had five digs which was one behind team leader Kenna Peveto who had 6 digs.

LCM came out strong taking a 10-2 lead in the first set. The Lady Bears never trailed after that point and won the opening set 25-22 over the Lady Raiders.

The second set stayed somewhat close until about the midway point as LCM built a 19-10 advantage and won the set on a Chrissy Joseph winner 25-14.

Lumberton played its best set of the match next. The Lady Raiders produced several kills in a 25-22 score to take the third set.

Little Cypress-Mauriceville is 3-1 in district action. The Lady Bears played the West Orange-Stark Lady Mustangs on Tuesday and will conclude the first half of district play on Friday against the Silsbee Lady Tigers at home in the Dr. Pauline Colburn Hargrove Gymnasium.