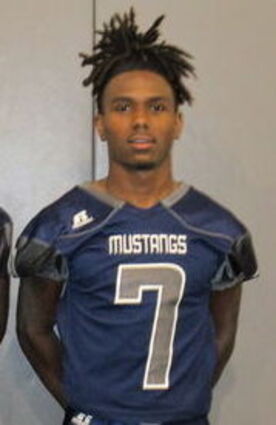 The West Orange-Stark Mustangs started their district games last week at Silsbee hoping to snap a two-game losing streak. The Mustangs had a narrow lead in the second half before the Tigers rallied and won the game.

The loss was the first for the Mustangs in a district game since Silsbee beat them in 2009. West Orange-Stark must bounce back this week to have any realistic chance at a district title.

Dakarion Judge of the Mustangs started the scoring by stripping a Tiger runner of the ball and going 60 yards for the touchdown. West Orange-Stark took a fourteen point lead before Silsbee got on the board.

Coach Hiawatha Hickman of the Mustangs said it was a game his team had every opportunity to win. "We actually went up 21-10 in the second quarter. We had a guy in the end zone wide open who doesn't make a catch. The Tigers fumbled the ball on our sideline and we don't scoop and score. At one point we might have been up three maybe four scores. We just didn't make enough plays in the long run on defense," Hickman recapped.

Hickman was encouraged by how well Judge played on defense and offense for the Mustangs. Sophomore quarterback Marcus Turner had a good game.

Sophomore running back Tahj Amerson got several carries and did well with the ball. Hickman evaluated, "I thought our kids fought hard. It was a tough football game. I don't think the score is indicative of how close the game was."

Jamaal Shaw did suit out for the game, but his ankle injury was still too sore to allow him to play against Silsbee. The coach is hopeful Shaw will be able to play this week.

Mustang offensive guard Elliott Adams was banged up in the game against Silsbee. Adams is expected to be ready for the next game.

Junior quarterback Keyshawn Robinson who started most of the games last season and the first four games this year for West Orange-Stark will not be available for the Mustangs. Robinson announced last week he is leaving West Orange-Stark High School.

The second game of the district schedule for the Mustangs will be Friday against the Liberty Panthers. The Panthers have lost all five of their games so far by a total of 39 points which means they have stayed close in every contest.

Liberty has changed is offense from the Wing T three yards in a cloud of dust used in recent years. The Panthers now operate out of the Spread under their new head coach Chris Lackey and offensive coordinator Lincoln Hanke. "It's the typical Spread offense stuff that we've seen which we hope we can handle to get back on the winning track," Hickman analyzed.

The Panthers will line up with four receivers and three wide receivers similar to so many high school offenses that have gone to the Spread. They will try to throw the football on the Mustangs' defense.

Senior quarterback Gavin Fontenot has a good arm. Fontenot played various positions when the Panthers were in the Wing T so he is capable of running the football when he is not throwing it.

The top two receivers for Liberty are Dawson Victorian and Zach Breaux both with good speed that can burn secondaries if they get the football. "Those are the two standouts on their offense. They make plays," Hickman indicated.

The running back position is somewhat in transition for Liberty. Hickman stated the quarterback Fontenot is probably the Panthers' best runner.

Liberty is somewhat young on defense with just two returning starters. The Panthers are implementing a new defensive scheme this year.

Hickman said from watching film on the Panthers they are aligning in a 4-2-5 formation and will frequently have three downed linemen in the front. Liberty defense has solid players in the middle and on the outside.

Two big guys in the middle are noseguard Cord Carter and one of the tackles Kolton Bishop. They anchor the defense for the Panthers.

Dra'core Bankhead is an outstanding safety for Liberty. Bankhead is called a monster in one-on-one situations at his position.

Fontenot may also see time on defense for the Panthers in the secondary. The two wide receivers Victorian and Breaux are the cornerbacks and both are very good on defense as well.

West Orange-Stark will not take the Liberty defense for granted despite its winless record. Hickman cautioned, "They play hard for 48 minutes, and you can tell Coach Lackey has got them really going after it over there."

Three game losing streaks at West Orange-Stark are extremely rare. The current three straight setbacks are the first time the Mustangs have lost three in a row since 2001.

The coaches and players reviewed game films last Saturday to see where they made mistakes and where they need to improve to get a victory. Hickman reflected, "The kids understand and see how well we did play. I'm just waiting for it to happen and you will see us improving every week as we're just trying to put it altogether and get rid of all the distractions."

The Mustangs will be looking for their first district win on Friday when they play the Liberty Panthers. "I think this team needs a win this week in a bad way. With a win we can get back on track. Our first five games were pretty tough. If you look at our schedule we just played it was pretty tough. Most of our first opponents will probably be playoff teams. The kids have a good spirit, they all showed up on Saturday, they work hard, and you're going to see it happen it's going to happen all our goals are still in front of us," Hickman concluded.

Friday's game is homecoming for the West Orange-Stark Mustangs when they play the Liberty Panthers. The kickoff is scheduled for 7:30 PM at Dan R. Hooks Stadium.