Shinedown brings the rock back to H-town 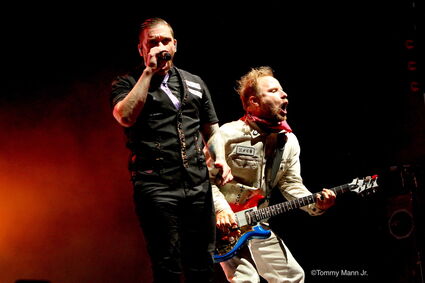 Shinedown, featuring vocalist Brent Smith, at left, and guitarist, Zach Myers, performed a spectacular two-hour set of material during its headlining performance at the Cynthia Woods Mitchell Pavilion in The Woodlands, Texas, this past Saturday (Oct. 1, 2022).

Hard rock titans Shinedown returned to the Houston-area this past weekend and delivered a sensational evening of rock and positivity to a near-capacity crowd.

Shinedown performed a two-hour set of rock hits and new material this past Saturday (Oct. 1, 2022) at the Cynthia Woods Mitchell Pavilion in The Woodlands, Texas, in front of several thousand boisterous fans and friends. The band is touring in support of its new album, "Planet Zero," its seventh album which was released on July 1 and peaked at number one on several Billboard album charts, including US Top Rock Albums, US Top Hard Rock Albums and US Top Alternative Albums.

The group opened with "The Saints of Violence and Innuendo" from the new album and featured other new tunes spread throughout its set during the course of the night, including the thought-provoking tunes "America Burning," "Planet Zero" and the touching "Daylight."

Vocalist Brent Smith and his bandmates Zach Myers (guitar), Eric Bass (bass), and Barry Kerch (drums) took the audience on a musical roller coaster with a variety of hard rock gems such as "Devil," "Enemies," and "Monsters," as well as big radio hits like "45" and "Second Chance" among others.

The group closed out the night with a surprise cover track, "Don't Look Back in Anger," by Oasis and the Lynyrd Skynyrd song "Simple Man," which is a set staple and featured a special on-stage appearance and vocals with Jelly Roll. Shinedown closed the show with "The Sound of Madness" to the delight of all in attendance.

Jelly Roll was the main support act of the evening and he delivered an enthusiastic 60-minute set in between the roaring chants of "Jelly, Jelly, Jelly." Jelly Roll may be a feel good story, but his charm, sincerity and talent definitely let everyone in attendance know he is not going to be a one-hit wonder.

Songs such as "The Hate Goes On," "Only" and "Fall in the Fall" kept the fists pumping and toes tapping and his hit "Dead Man Walking" was met with a resounding roar of approval. His medley of cover songs such "Smells Like Teen Spirit," "99 Problems," "Killing in the Name," and "Beer Never Brooke My Heart" added more fun to the show, but the most touching part of the Jelly Roll set was when he brought his 13-year-old daughter, Bailee Ann, on stage to sing "Tears Could Talk." 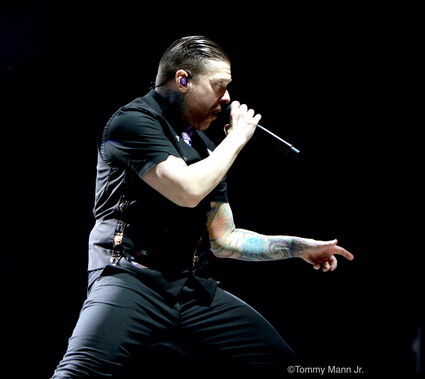 Opening the show was Nashville-rocker John Harvie, who is touring in support of his new album, "Told Ya," and features the single "Bleach (On the Rocks)." His 30-minute performance was fun and energetic and featured high-energy tunes. Harvie himself was engaging and patrolled the stage like a seasoned veteran. The only negative about his performance was his admission of being a Philadelphia Eagles fan after teasing the audience about the Texans, but we will forgive him based on his youth and promising future. In all seriousness, Harvie gave it his all during his brief showcase and easily made a few thousand new fans in Houston. Hopefully he returns sooner than later.