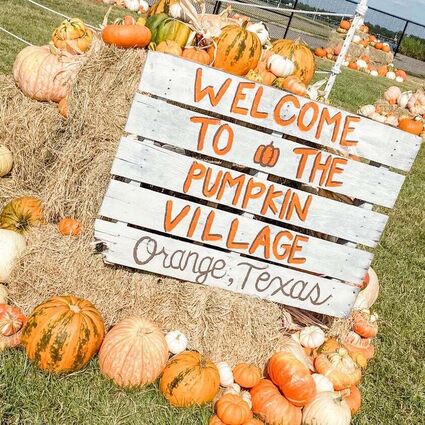 Some 10,000 pumpkins and gourds, along with hay bales and scarecrows have been designed as a picturesque pumpkin village at the Orange Boat Ramp for Orangetober festivities this weekend.

People can immerse themselves in fall this weekend by carving pumpkins, strolling through displays of pumpkins, and even immersing themselves face first into a pumpkin pie. The activities are all part of the Second Annual Orangetober sponsored by the city of Orange.

Live entertainment will be included at the three-day festival, with the featured performer country star Kevin Fowler Saturday night. Food trucks, craft beer, soft drinks, family activities, craft vendors, games, and competitions will be available. All events, except a Saturday morning run, will be at the Orange Boat Ramp area off Simmons Drive. Entertainers will perform at the Riverside Pavilion.

The festival begins at 4 p.m. Friday as the elaborate pumpkin and gourd displays featuring more than 10,000 pumpkins and hay bales. The designs are created and set up by city staff and volunteers. Displays make perfect backdrops for photographs.

Families may bring lawn chairs or blankets to watch the classic October movie 'Hocus Pocus,' which will be shown on an outdoors big-screen starting at 7:30 p.m.

The Big Pumpkin Run, sponsored by 3 Bros Running Company, will start at the Boat Ramp at 7:30 a.m. Saturday. Runners and walkers will travel through downtown and the Old Orange Historic District. The non-competitive participants might stop to find a hidden pumpkin along the way to collect a prize.

Gates to the grounds will open at 10 Saturday morning with a variety of craft vendors setting up to sell wares. Other booths will offer activities for children or games.

A Gumbo Cook-Off is also part of the festival with judging at 12 p.m. Saturday. The participants will also be selling bowls of the Cajun staple.

The pumpkin pie eating contest rules say "no hands allowed" with participants getting 90 seconds to see who can eat the most pie. Pies will be weighed before and after the chow-down to determine the winners. Registration requirements include participants must show no signs of sickness or they will be disqualified. Participants younger than 18 must have parental permission.

Saturday entertainment at the Riverside Pavilion will be the Flava Band at 3 p.m., J.T. Reserve at 5 p.m., Joey Greer at 7 p.m., and then Kevin Fowler at 9 p.m. Fowler is a Texas singer-songwriter icon with radio hits like "Hell, Yeah, I Like Beer," "Long Line of Losers," and "Don't Touch My Willie."

Coolers will not be allowed on the grounds as soft drinks and adult drinks will be sold by vendors. Pets are also not allowed.

Gates will open at 11 a.m. Sunday. Families, groups, and individuals will be allowed to take the pumpkins home for decorating or other uses beginning at 3 p.m. No pumpkins may be taken before that time.