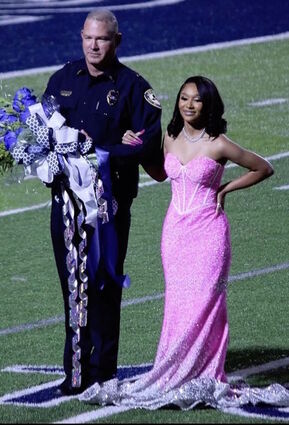 Like hundreds of girls across Texas during football season, Aamiyah Gradnigo walked the field in an evening gown for homecoming ceremonies. But instead of being escorted by her father, she walked arm-in-arm with a uniformed police officer.

She asked Orange Police Sergeant Jason Laughlin to walk with her because of their close relationship that developed when he was the lead investigator into the home-break-in murder of her older sister and the sister's boyfriend.

"I was just floored," when the family asked me, Laughlin said. "I was very honored.

Aamiyah is a senior cheerleader at West Orange-Cove High School and was chosen this year as cheerleader sweetheart. Laughlin escorted her for the traditional ceremony at homecoming and presented her with an elaborate bouquet of flowers with ribbons of the blue and silver Mustang colors. The flowers were a gift from the Orange Municipal Police Association.

The unusual relationship with Laughlin and the Gradnigo family began about 2:30 in the morning of January 23, 2021, when a double shooting was reported at a home in the Charlemont subdivision in Orange. Laughlin, a 22-year law enforcement officer, usually works as a detective in the narcotics division, but that weekend he was the detective on call to investigate serious crimes.

"It was horrible, horrible, so tragic," the sergeant said about the crime.

Aaliyah Gradnigo was 19 and had been traveling with her boyfriend, Thalamus Livings, 23. They had stopped to visit her parents and decided to spend the night the home. An ex-boyfriend of Aaliyah had followed them from Houston to the house. He broke into Aaliyah's bedroom window and shot her in the head as she laid in bed. Livings was shot in the bathroom as he was taking a shower. The killer then escaped out the window.

Aaliyah was alive when first responders arrived. Laughlin said Aamiyah held her bleeding sister in her arms. Aaliyah was taken by ambulance to an area hospital where she died. Livings was dead at the scene.

The horror of the family and the police efforts to catch the killer forged a bond that will not be forgotten. "I was constantly in contact with them throughout the case," Laughlin said.

Earlier this year, a jury in state district court convicted Manka Melson, 24, of Vinton, Louisiana, of capital murder for killing the two. He will serve the rest of his life in state prison without parole.

The Gradnigo family posted on Facebook a photograph of Laughlin and Aamiyah at homecoming. They included a photo of Assistant District Attorney Krispen Walker, who prosecuted Melson, though Walker did not participate in the homecoming. It was a tribute to the local legal system and the care given to crime victims.

That care has inspired Aamiyah. Laughlin said she was recently accepted to attend Sam Houston State University. She will study criminal justice to pursue a career in which she, too, can help others.