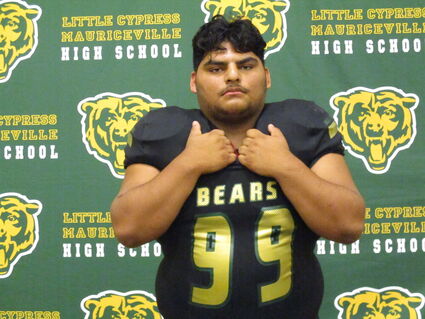 Little Cypress-Mauriceville christened its new playing field last week with a win. This week the Bears must go on the road to play their first district game at a field where they have not had a lot of success.

Homecoming was part of the celebration for the first game played at Battlin' Bear Stadium with its new artificial turf. The Bears defeated the Legacy Titans from Spring 50-34 on Friday night.

Coach Eric Peevey thought it was a great week for Little Cypress-Mauriceville which had played two scrimmages and its first four games away from home. "Six weeks in a row we were traveling. The kids had excitement all week playing back at home, and we played a very talented team in Legacy. Their quarterback was unbelievable, but I thought our defensive line played amazing trying to keep him contained," Peevey reminded.

Noteworthy was the play by Bears Amier Washington and Jarvis Riley on the defensive line. Also singled out by the coach was Jose Molina who was very impressive early in the game pressuring the Titan quarterback.

Legacy scored on their first possession before LCM stopped the Titans multiple times that gave the Bears great field position. Peevey elaborated, "We really bowed our necks at times and it allowed us to get a three score lead."

The pass combination of quarterback Dean Reynolds and Kyler Garlaska started to pay dividends with a pair of touchdowns. "We knew that was going to be a good connection for us. We just kind of struggled getting the ball between the two of them early in the year, but we had a good off week and we saw it happening. We need those two to keep on the same page," Peevey stated.

Wide receiver Elijah Allison had a good game too. The contributions of Garlaska, Allison, and the other Bear receivers allows LCM to spread the ball out sideline to sideline and vertically which helps open things up for running back Da'Marion Morris who scored four touchdowns in the game against Legacy.

More good news was the return of Jordan Pollack from his knee injury. Jordan is back at full tilt and his brother Jacob had several key receptions last week for the Bears. Peevey praised, "Those two are just straight football players that's what they do. Having both of them allowed us to use our full offensive potential."

The first game of district for Little Cypress-Mauriceville will be against the Vidor Pirates on Friday. The Bears and the Pirates were co-district champions last season.

Vidor has run the Slot-T offense for years and are the best at doing it in southeast Texas. When the Pirates run for three yards they high five each other because that is their goal to control the ball and keep the other team's offense on the sideline.

Peevey described the Vidor offense. "Three yards in a cloud of dust over, and over, and over, and over again. It's the type of team that you have to limit them on first down. You've got to take first down away from them and make it less than three yards to make them get out of what they want to do because they're just going to keep doing what they're doing until you stop them."

The Slot-T starts with the Pirates' quarterback Jarrett Odom. He was one of the best defensive players in the district last year. Odom is a big strong physical player that does a good job on offense for Vidor now.

Halfback Ricky Gall and fullback Jason Watson are two running backs who will get the ball a lot. The Pirates rotate their backs to keep all of them fresh.

There is no one back that the Bears can key on to stop. "They will spread the ball around to all the different kids. Some games the halfback will have more yards, some games the quarterback will have more yards. Really they're just going to take what's given to them. So, you defensively really have to take it all away from them and make them earn it play by play," Peevey analyzed.

The Vidor defense is based out of a 3-4 alignment. The three linemen in the front will slant and move constantly to throw off the oppositions blocking schemes.

Watson is the best defensive lineman for the Pirates according to Peevey. He leads the district in sacks.

All of the Pirates on defense are great at pursuing the ball, and they are very good at stopping the run. Peevey indicated, "They're going to put everybody in the box at times and get after it. The Pirates play very physical and they play with a high motor so we know that we have to come in and play physical and match that intensity. We know we have our work cut out for us this week."

The Pirates had their bye last week and probably used that extra time to get ready for LCM this week. Peevey would not be surprised to find out that Vidor coach Jeff Mathews and his staff were at the Bears' game against Legacy.

A win for the Bears against Vidor to start district would be huge. "No matter how you look at it starting off district with a win is a huge accomplishment especially in Vidor. You can't look ahead in district you're looking at what's right now this game, this week, and this week is the biggest week of the year because it is this week of the year. That's how we have to go into it, and when you play a team like Vidor it's got to be every play. There can't be plays off, it's got to be every single play because you don't know how many plays you're going to get so you have to make full advantage of every play you have," Peevey concluded.

The Little Cypress-Mauriceville Bears battle the Vidor Pirates on Friday. The game kicks off at 7:30 PM in Vidor.