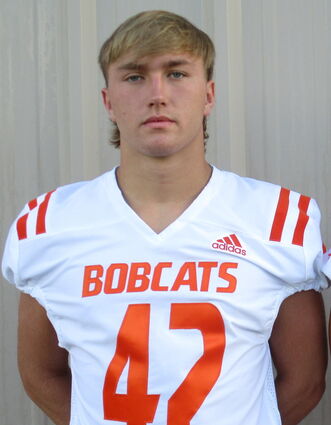 Last Friday night the Orangefield Bobcats traveled to Anahuac and captured a huge district win. This week the Bobcats will celebrate homecoming.

Orangefield and Anahuac entered the district games two weeks ago as the two favorites to win the district championship. Both teams won their district openers. With Friday's win the Bobcats have sole possession of first place by half a game over East Chambers and Tarkington each of which have one win and had their bye week during the first two weeks of district play.

Coach Josh Smalley of Orangefield was proud for his players and coaches in the big win over the Anahuac Panthers. "We preached to the kids enjoy the win and be proud of it, but we haven't clinched anything. We didn't clinch a district championship, we didn't even clinch a playoff spot. It does put us in good position, but it doesn't solidify any of our goals. We came back to work on Monday knowing we cannot afford to slip up this week because that win will mean nothing then," Smalley acknowledged.

Standouts for the Bobcats in the win over Anahuac start with running back Cameron Dischler who had 37 carries in the game for 261 yards and a touchdown. Dischler also threw a touchdown pass in the game.

The young Orangefield offensive line is maturing now six games into the season. They blocked well to help Dischler and the other Bobcat runners pick up key yardage during the contest to keep the explosive Panthers offense off the field.

Special recognition was given to the defensive players and coaches for the Bobcats. Smalley praised, "I want to give a lot of credit to our defensive coordinator David Kendrick, the defensive coaching staff, and the Bobcats playing on defense. Anahuac came in averaging forty something points a game and we held them to fifteen and shut them out in the second half."

The focus this week will be the Tarkington Longhorns who at 4-1 on the season and 1-0 in district are much improved over previous seasons. The Longhorns have a new head coach in Chad Taylor who was the head coach at Liberty for many years.

Coach Taylor has implemented the Double Wing formation at Tarkington just as he did while at Liberty. The Longhorn offense is geared to getting three yards in a cloud of dust, control the game clock, and keep the other team's offense off the field.

Junior Karson Jones at wing back is the Longhorns' leading rusher. Tanner Johnson is the quarterback for Tarkington and is also a good runner.

When the Longhorns do throw the football which is seldom the primary target is sophomore Eniseli Ma'alaelu. His speed makes him a threat for the Bobcat secondary to be aware of.

The front line for Tarkington is led by junior Nathen Wells and senior Johnathon Morgan. The Longhorns like to run behind those two bulls as much as possible.

Tarkington uses an old school offense but it has been effective for the Longhorns this season. "It's a scary offense because even if the Longhorns don't score if they can get two or three first downs they can take five or six minutes off the clock. Tarkington limits your possessions offensively which is what we like to do. If we don't capitalize on our possessions we're going to be in a dogfight for forty-eight minutes because they're going to control the clock. It's going to be a challenge for use to make them punt," Smalley analyzed.

On defense Tarkington lines up similar to the Bobcats in a 3-4 with a noseguard, two tackles, and two inside linebackers. The Longhorns are aggressive and young on defense.

A leader of the Longhorn defense is sophomore Gunner Moore as an inside linebacker. On the outside are linebackers Bryant Ma'alaelu and Rock Page who are both very quick.

Though young when the season began the Longhorns are improving how they play defense. Smalley described, "They're steadily learning now six games into the season when they play us. The Longhorns have grown up a little bit. They're settling into their roles and are well coached. We're going to have a challenge on Friday moving the ball against them."

The same maturing as a unit could be said for the Bobcats who were especially young in the offensive and defensive lines when the year started. Smalley explained, "I can't keep calling them young because they've got six games under their belts and now they're experienced varsity players. I've watched them progress through the season to where they are now I can see the tremendous growth and how much they've gotten better each week."

Orangefield is coming off a big win but can ill afford to be thinking about that win or a future game with East Chambers when Tarkington is the opponent this Friday night. "Our job as coaches is to direct them to be focused on this week. It is homecoming for us which is another distraction that we'll have to deal with all week. Tarkington is four and one and one and oh in district, and so it's not like we're playing a team that's oh and five. They're a good football team, they're undefeated in district, and so it's a big game for us. Coach Taylor is familiar with us and he knows what we do so it's a tremendous challenge for us as a staff to keep the Bobcats focused," Smalley concluded.

Friday will be homecoming at Orangefield when the Bobcats play the Tarkington Longhorns. The kickoff is scheduled for 7:30 PM at F. L. McClain Stadium.