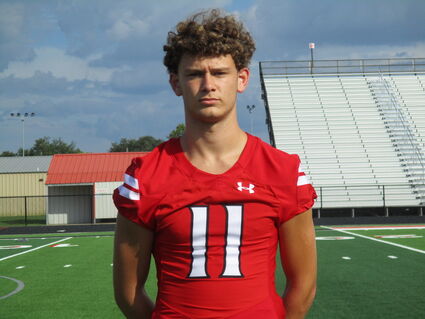 After their bye week the Bridge City Cardinals will be back in action this Friday. The Cardinals are recouping from the loss of several starters during the games prior to their bye week.

Coach Chad McGuire said several injuries sustained by Bridge City against Lumberton and Hamshire-Fannett have proved to be season ending for some of the Cardinals. Caden Welch broke his collar-bone and is lost for the remainder of the campaign. Hutch Bearden injured his throwing arm and is doubtful for the remaining games. His brother JS Bearden was injured against Hamshire-Fannett and will not play in this week's game against Jasper.

Hutch Bearden's replacement as the Cardinals' quarterback Josmany Robleto was hurt on the first play of the Hamshire-Fannett game and his status is questionable. Gavin Bodin who has been a receiver will probably be the new quarterback this week.

Austin Bellanger had a concussion in the Lumberton game and has observed the proper protocol making him available for Friday's game. Rayburn Hebert separated his shoulder against Lumberton and sat out the Hamshire-Fannett game. With the bye week Hebert has had two weeks to rest the shoulder and is expected back this week.

Injuries are part of the game according to McGuire. "We've got quite a few out, we've got some coming back, we've got some done for the year. That's football and it is the next man up," McGuire explained.

Bridge City will play the Jasper Bulldogs on Friday. The Bulldogs are 2-0 in district with close wins of seven points or less against Liberty and Hamshire-Fannett.

Jasper uses the Spread on offense. The Bulldogs use their speed to stretch the field and get the football into the hands of their talented skill players.

The quarterback is senior Zikeice Simmons. He is very active throwing and running the ball. Simmons passed for 898 yards and 10 touchdowns while running for 414 yards and 4 scores in 2021.

One of Simmons' primary receivers is junior Britain Simmons his brother. The leading rusher is Keon Garrett a talented and tough runner for the Bulldogs.

A veteran offensive line will provide protection for Simmons in the pocket when passing and open holes for Garrett when a run is called. Leaders in the Jasper offensive line are center Kayden Caraway, Al Adams at a guard, and right tackle Bryce Coleman.

The Bulldogs have averaged scoring over 24 points a game in their first six contests. McGuire indicated, "They've got some size and some talent. Jasper is a talented offensive team. They run and throw the ball. So, there's not one you can say if we stop the pass we've got them or if we stop the run we've got them. They can do both, and they do both well. It's going to be on us to be more physical than they are, and we've have got to make tackles, you can't miss tackles. I've always said missed tackles and dropped interceptions kill the defense and kill the team faster than anything."

The defense is a 3-4 for the Bulldogs. The Jasper secondary relies heavily on man coverage to defend against the pass.

Just like their offensive line the Jasper defensive line is big and experienced. The leader is tackle junior Tylon Garrett who had 58 tackles, 20 behind the line of scrimmage, and 6 sacks last season for the Bulldogs.

Junior Tyanthony Smith at inside linebacker is another force for Jasper. Smith had 102 tackles last year 16 of them for losses.

The secondary for the Bulldogs is very good with Jakharyn Parks another junior at one of the corners. Safeties Braylon Green and Andre'von Thomas both juniors are very active and do a good job of coming downhill to hit opposing ball carriers.

The Bulldogs are very athletic on defense. McGuire evaluated, "They fly to the football, they're very physical. The Bulldogs like to blitz so we'll have to pick up blitzes. We've got to make sure that our guys are making the plays when they get the opportunity. We throw a pass make the catch, gets some yards, and let's get us some first downs and keep some drives going. It's going to be a tough challenge, but we're looking forward to it. It's always good to play good teams. You only get better by playing those types of teams."

The key for the Cardinals in this game as it has been in the previous games is putting four quarters together according to Coach McGuire. Bridge City has outplayed or played even with several opponents this season for a half but then see the game get away from them in the other two quarters.

The injuries as mentioned previously mean several Cardinals will need to step up to replace those that have been hurt. McGuire pointed out this game is an opportunity for several of his players to stand out by playing well.

As always McGuire wants his Cardinals to be the most physical team and the best well-conditioned team but he also wants Bridge City to be the most focused team for four quarters. "We can't play two quarters great and then come back and play a terrible second half. Our kids are working hard, their excited, and this is a great opportunity for them," McGuire concluded.

The Bridge City Cardinals play the Jasper Bulldogs at Larry Ward Stadium. The game time is 7:30 PM on Friday.