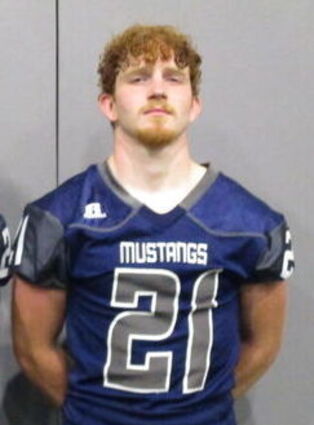 The losing streak is history and now the prospects of a winning streak is in the minds of the West Orange-Stark Mustangs. The next game will not be a walk-over though for the Mustangs this week.

West Orange-Stark scored its most points of the season in its 53-8 win over the Liberty Panthers last week. The victory evened the Mustangs' record to 1-1 in district.

Coach Hiawatha Hickman said it was good for the Mustangs to score early against Liberty and get a comfortable lead allowing them to relax and play the game less stressed at the end. "We're starting to see some of the fruits of our labor, what we've been talking about building towards," Hickman expressed.

Quarterback Marcus Turner was one of eight sophomores that played substantial minutes against the Panthers, and he had maybe his best game of the season for the Mustangs. Dakarion Judge made several good catches in the game.

Multiple running backs including Jalen Gilmore, Raymond Mallett, Tahj Amerson, and Dustin Helm all played well. Helm set a Mustang record that will never be broken with a 99-yard run from scrimmage for a touchdown late in the game.

Some possible good news for West Orange-Stark is Jamaal Shaw who injured his ankle very early in the Newton game four weeks ago should be available for the Mustangs. Hickman informed, "We've played without Jamaal for three games, he's our guy a two-way starter. He's a big time recruit. If we look back if we had him in the Silsbee game it's a completely different game."

This week's opponent for West Orange-Stark is Hamshire-Fannett. The Longhorns are 4-2 for the season and 1-1 in district after losing to Jasper by five points last Friday.

The Longhorns operate their offense out of the Spread. They have rolled up 227 points in six games and have scored at least 31 points in every game but the one with Jasper.

In the Spread the Longhorns will line up with dual wide receivers to both sides or go three to one side at times. They will get in some empty backfield looks with only the quarterback behind the center.

Returning to the quarterback position for the Longhorns is junior D'onte Zeno who started at quarterback his freshman year but was used as a wide receiver last season. Zeno is a fantastic athlete who has thrown the ball for about a thousand yards already, but his ability to run with it is what makes him a serious threat. Hickman emphasized Zeno is the guy that makes the Longhorns go. "He drops back, scrambles, he can deliver the ball throwing, he does a little bit of everything," Hickman evaluated.

Wide receiver John Sanderson had a good game against Jasper so he will be a concern for the Mustangs' secondary. Mason Hein is another dangerous wide out for Hamshire-Fannett.

Senior running back Tyler Spencer has big play abilities. Spencer is a patient runner who will look for creases in the opposing defense to cut through. He rushed for 779 yards last season.

The Longhorns have a solid offensive line led by left guard senior Jake Speyrer. Hickman stated, "They play hard. That's one thing you notice about Hamshire-Fannett they're always tough hard-nosed kids and they play really hard on offense."

Hamshire-Fannett lines up in the old 50 Defense much as West Orange-Stark did for decades. The Longhorns will blitz everybody and play man coverage in the secondary.

Two offensive starters are key players in the Longhorn secondary with Zeno starting at one safety and Hein at the other. A lot is expected of those two to provide pass coverage. "That's one of the things we're going to try to exploit by trying to make Zeno and Hein run a little while making them cover our people," according to Hickman.

Another two-way starter is Speyrer at noseguard lined up next to Raheem Miller at tackle who is very difficult to move. Possibly the best tackler for the Longhorns is inside linebacker Gavin Deranierri.

The Longhorn defense is based on pressure. Hickman elaborated, "They're going to pinch, they're going to run man-to-man coverage, bring guys off the edge, a lot like the Mustangs a lot like several teams in this district use that sick 'em defense. We feel like we can block down and kick out to take advantage of a few of those things."

West Orange-Stark and Hamshire-Fannett are tied entering Friday's game. The winner of the contest will take a big step to securing a playoff position and a higher seed for the post season.

The Mustangs are taking the district schedule one game at a time. On offense they want to run the ball like they have been doing, and they want to get their athletes in space. Hickman thought the Mustangs did that well in the game against Liberty last week with Judge and Mallet, and he hopes they can repeat it when they play the Longhorns.

The offensive line for West Orange-Stark will have to pick up blitzes that the Longhorns like to bring off the edge and up the middle. Playing teams like Newton and Silsbee earlier should have the Mustangs ready for Hamshire-Fannett's type of defense.

The game will be on the road for West Orange-Stark which has lost its last two road games at Newton and Silsbee. "Our kids know Hamshire, it's not an unfamiliar place for us. We'll be over there on the grass and it doesn't like there is going to be any rain this week so we should have a dry surface. I don't think it will be that much out of the ordinary to go over to Hamshire. Our kids have been doing it for years," Hickman concluded.

The West Orange-Stark Mustangs play the Hamshire-Fannett Longhorns in an important district contest. The kickoff will be at 7:30 PM on Friday.