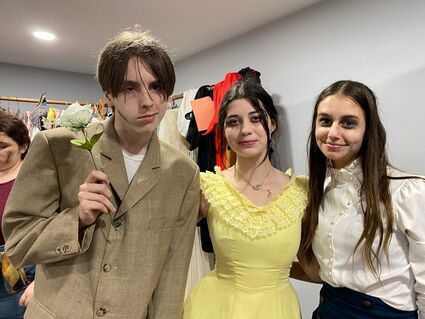 This year, about 100 drama students from Bridge City, Little Cypress-Mauriceville, Orangefield, Vidor, and West Orange are participating to tell the true stories of Orange County.

"We are happy that all our public schools can participate this year," said Adam Conrad, president of the Heritage House board of directors.

Drama teachers helping with the ghost walk are Aliceson Haynes and Katelynn Haynes from Bridge City, Ashley Dennison from LC-M, Angelique Catt from Orangefield, Stacy Webb from Vidor, and Mason Franco from WO-S.

Conrad is now a counselor at Vidor High after being the school's drama teacher for several years. When Heritage House was organizing the first historic ghost walk in 2016, he volunteered his drama students to dress up and give the stories along the walk. Since then, the other schools have joined the effort to save local history.

The historic ghost walk takes people from Heritage House Museum on Division Avenue eastward along the street past the courthouse and other landmarks. The walk the goes to the Sabine River and circles back on Front Street, and then back to Heritage House.

Conrad said the walk is about half a mile long. People should wear comfortable shoes. Groups of people are led down the trail and stop at different locations, where costumed drama students tell true stories of the past in the places where they happened. The stories have been written and researched by Heritage House board members.

This year's stories will include the Orange County War of 1856 with the county dividing into two factions. The fighting in a few weeks led to at least 12 deaths. People can also learn about "The End of the Line Railroad" and the high-speed chase downtown in 1988 to catch a serial killer who turned off Interstate 10 as he tried to escape. They will also learn how an Orange courtroom became the inspiration for a major U.S. Supreme Court decision that gives accused people the right to be represented by a lawyer.

The students who participated in past years have enjoyed learning the history and getting to meet with other drama students in the county, Conrad said. Some of the past participants who have graduated from high school volunteer to come back and help.

The museum in 2019 began changing stories that are told in-depth. Conrad said the plan is to have three years of stories and then rotate back. This is the third year of the rotation; so people will be able to hear histories that have not been presented.

Because of lines that developed for the first historic walks, the museum now sells tickets with reserved times. While people wait for their group to leave, they can now relax on the back lawn of Heritage House. Tables and chairs will be set up and food trucks will be selling their specialties. Free State Winery will also be there to sell their local product to adults.

In addition, lawn games are set up and a table will have children's activities.

The walk this year is being divided between two time periods. A family-friendly walk will be offered from 3 p.m. to 5 p.m. Saturday. The drama students will take a break to rest and eat for two hours before starting again at 7 p.m. as darkness falls with the tours ending at 9 p.m. More "spooky" characters will be walking around spectators during the night walks.

During the two-hour break beginning a 5 p.m., Free State Winery is sponsoring Hailey and Brett Cooley, singers and songwriters, to perform on the back deck at the museum. People will be able to relax and enjoy treats from food trucks by Mr. Burger, the Pink Lady, and Funnel'd.

Admission for the historic ghost walk is $5 for adults and $3 for students and children.