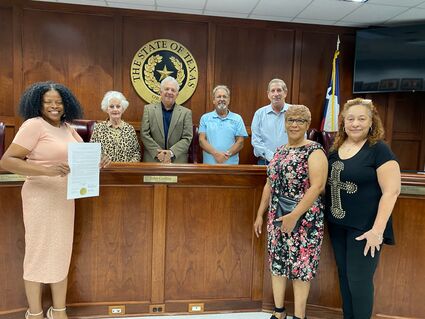 Orange County Judge John Gothia Tuesday morning issued a countywide burn ban on recommendation of the county's emergency management director because of the indices that show drought conditions could aid the spread of wildfires.

At the Commissioners Court meeting Tuesday afternoon, Gothia said all the other counties around Orange County have burn bans and it was time for one here. He said rain is in the forecast this week, but we cannot be sure it will fall here.

Adjacent Jasper County had several wildfires during the past weekend.

In other business, an engineering consultant reported the county is now ready to get bids for flooding mitigation projects that will improve 45 miles of ditches along 8.9 miles of county roads. Some of the work will include changing ditches and culverts. He hopes to have a contract within two months.

Money for the drainage improvements is coming through the Texas General Land Office, which oversees federal hurricane recovery programs. The county has an $8.9 million budget from federal Community Development Block Grants related to Hurricane Harvey.

Before the regular court meeting, commissioners held a public hearing for the annual allocations of the county's hotel occupancy tax fund. The money comes from a tax hotels and motels charge for people who stay. The state restricts the use of the HOT funds. Groups are allocated the money and then are reimbursed after they turn in receipts showing the expenditures.

The largest amount is $100,000 going to the Greater Orange Area Chamber of Commerce for the nationally-famous Bassmasters Elite fishing tournament. Chamber president Ida Schossow said they hired a consultant for last year's Bassmaster's tournament to assess the money brought into the county. The survey said $3.2 million was spent in the county by people either participating in or watching the three-day tournament.

Steve Jones, who oversees organizing for the tournament, said Orange will be the only Texas stop for Bassmasters next year. He said other places have bigger fish, but Orange's hospitality has made the city a popular stop with the pro anglers.

The Lutcher Theater is receiving $45,000. The Stark Foundation pays for the building and staff, but donations and box office receipts pay for the touring shows. Statistics have shown the touring companies casts and crews alone bring in thousands of dollars to the local hotels.

Heritage House Museum, organized to preserve county history, will receive $30,000. Museum board director Kimberly Manning said the main museum will have a grand opening and ribbon-cutting on December 7 to kick off the annual visit from Santa. The museum had been closed for five years after suffering on-going damage from hurricanes.

The Vidor Chamber of Commerce was awarded a total off $15,000, split equally for sponsoring the Music by the Stars event and the separate Texas Star Music Festival.

The Orange County Livestock Association will get a total of $8,000 for three different events, the annual livestock show, the Sabine River Shootout, and the Cary Hester Livestock Show.

The Orange Lions Club will be receiving $5,000 to help sponsor the district convention covering 55 clubs spread across this area. Lion Chris Kovatch, who serves as district governor this year, said he chose Orange to host the convention, which will be held at the county expo center. He said many of the people attending spend the night.

The Lions Club will also get $7,000 to help sponsor another promotional mural. Kovatch said the mural painted earlier this year on the side of Orange Stationer cost about $10,000. The next mural will be painted on a wall of the Rogers Lumber Company, which faces Interstate 10. The county has been using the first mural commissioned by the Lions Club on a billboard.

Gulf Coast Cajun Association was given $5,000 for advertising their annual Cajun festival held at the VFW. Commissioners also allocated $5,000 to help sponsor a local fishing tournament for the many high school fishing teams that have grown across the region. In addition, Krew De Onyx was awarded $8,000 for its second Juneteenth Festival.