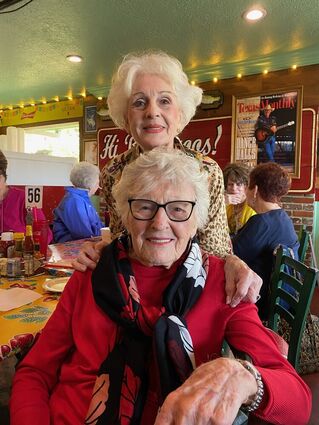 Former Orange County commissioner Marcel Adams celebrated her 99th birthday on Tuesday with lots of bridge-playing friends. She attributes playing the strategic card game as one of her ways to keeping active. And keeping active is a key to her longevity, she said.

Besides playing bridge, she regularly goes to church and church events. Plus, her little dog Noel keeps her company as she still lives by herself.

Adams made county history in the mid-1980s when she won election to the seat of Orange County Commissioner Precinct 2. She describes Commissioners Court in those days as a "good 'ole boys" club. The incumbent commissioner she beat criticized her for driving a sedan and playing bridge.

When she got elected, she bought a pickup truck and put on her boots to do her county work. "I was going to be one of the guys," she said.

She paved the way for two more women serving on Commissioners Court, including her daughter, Theresa Beauchamp, who is currently the Precinct 2 Commissioner, the same seat her mother held.

Adams was born in Shelby County, Texas, and moved to Orange as a young woman with her parents during World War II. The family came because of the shipbuilding and jobs from the war effort. "Orange was flooded with people. They all came for jobs," she said.

It wasn't long before she had a blind date with local Albert Adams. They dated six months and then got married. Albert "Cowboy" Adams is a local legend for his story-telling and antics through a life of Navy diving, riding horses, herding cattle, and being county animal control officer. After Marcel was elected to her county position, he ran and served as a director of the Orange County Drainage District.

"We were married 57 years when he died," Adams said.

Adams and her husband lived in the country for many years where they kept big dogs. Now, she lives in a garden home and has the little Noel to keep her company.

Keeping active is vital for her. "I stay busy. That's the thing to about growing old. Don't stop. Keep going," she said.