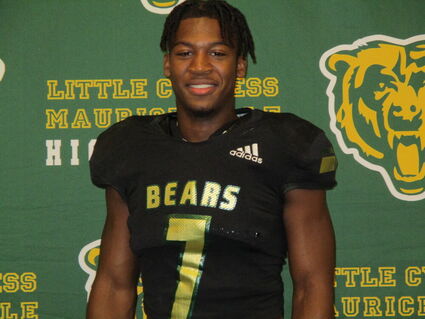 Da'Marion Morris of the Bears rushed for 190 yards, caught passes for 82 yards, and scored 3 touchdowns against Vidor

The Little Cypress-Mauriceville Bears and the Vidor Pirates played their opening district game on Friday night in Vidor. The Pirates played a near flawless second half to beat the Bears 36-29 at Ivan Croak Field.

Little Cypress-Mauriceville (3-3, 0-1) used a late rally in the second quarter to tie the game. Vidor (3-3, 1-0) scored its first three possessions of the second half to take a two score lead from which the Bears could not comeback.

The Pirates jumped to a 15-0 lead late in the second quarter which could have been more except for penalties. Vidor was called for a holding penalty that wiped out a touchdown pass but did eventually lead to a safety.

The Bears went for a fourth-and-one on their first possession and were stopped cold giving Vidor the ball at the LCM 34. The Bears were guilty of an offsides penalty that gave the Pirates' offense new life which they converted with a 16-yard pass from Jarrett Odom to Daigan Venable. The next play Dane Villadsen scored from the 14 with 7:44 left in the first quarter. Sammy Estupinan made it 7-0 for the Pirates.

The next Vidor possession had the touchdown called back. The following play Odom's pass was intercepted by the Bears' Kyler Garlaska at the two. On the Bears' first play they tried to pitch to Da'Marion Morris for a run but the Pirates swarmed and tackled him in the end zone for a safety. It was 9-0 with 2:19 left in the opening period.

After the free kick Vidor took over at the LCM 47. The Pirates got one first down before the Bears' defense stopped a Vidor runner for a two yard loss. The Pirates tried two passes the first was incomplete and on fourth down Morris intercepted the second pass at the 11.

The Bears got their initial first down of the half before punting to Vidor. The Pirates overcame two penalties to drive 58 yards in ten plays. On fourth-and-five Venable ran for 18 yards to give Vidor a first down at the 18.

Three more rushes by three different Pirate backs got them another touchdown with Jason Watson scoring from the 14 with 4:02 before halftime. Vidor was stopped on the two-point conversion try to keep the score 15-0.

It took two plays for Little Cypress-Mauriceville to reply. Morris broke about four tackles on a straight ahead run before sprinting to the end zone for a 67-yard touchdown. Lucas Wright's kick made the score 15-7 with 3:37 left in the half.

The best defensive series of the night for LCM forced a three-and-out for the Pirates. The Bears took the ball at their 22 with two minutes and twenty seconds to get on the board again. It took exactly that amount time for the Bears to score.

Bears' quarterback Dean Reynolds completed passes to Garlaska and Morris for first downs. A late hit by the Pirates after the catch by Morris moved the ball 15 yards into Vidor territory.

Another pass to Garlaska got the Bears a first down at the 23, but Garlaska failed to get out of bounds. The clock stopped for the first down but the referees then delayed starting the clock and actually added six seconds to leave 11 seconds to play. Vidor coach Jeff Mathews was not happy with the handling of this process by the referees.

Once play resumed Reynolds spiked the ball to stop the clock. On the next play Reynolds passed over the middle to Morris at about the ten. Morris shook loose from his defender and then bowled over at least two other Pirates at the goal line for a truly remarkable touchdown as time ran out in the half. The Bears went for two as Reynolds passed to Garlaska open in the right corner of the end zone and the game was tied 15-15 as the two teams went to their locker rooms.

The second half demonstrated the epitome of Vidor's Slot-T offense. The Pirates' first three times with the ball, three drives totaled 179 yards, 27 plays chewed up almost 12 minutes on the clock, and all three concluded with touchdowns.

Trailing 29-15 at the start of the fourth quarter LCM was able to execute a perfect reverse screen as Reynolds rolled right then passed back to his left to Morris who caught the ball and raced down the sideline for a 49-yard touchdown.

Vidor scored on its third drive of the half to go back up by 14 points. The Bears drove 83 yards in 16 plays to get a consolation touchdown with 35 seconds left as Reynolds passed 4 yards to Elijah Allison for the score.

The ensuing onside kick was recovered by the Pirates' Riley Marlow. The Pirates just took a knee to run out the final seconds.

Morris had a marvelous game in the loss for LCM. He rushed for 190 yards, caught 4 passes for 82 yards, and intercepted a pass playing defense. Reynolds threw three touchdown passes completing 13 of 30 tosses for 149 yards.

Vidor rushed for 310 yards led by Watson with 133 yards on 19 carries and two touchdowns. Dane Villadsen gained 78 yards on 11 rushes with one touchdown and Venable picked up 64 yards which included a touchdown also on 11 totes of the ball.

Little Cypress-Mauriceville will try to even its district record at Livingston next Friday night. Vidor plays one of the district favorites the Lumberton Raiders on Friday at Lumberton.