Bobcats play at the Hornets' nest 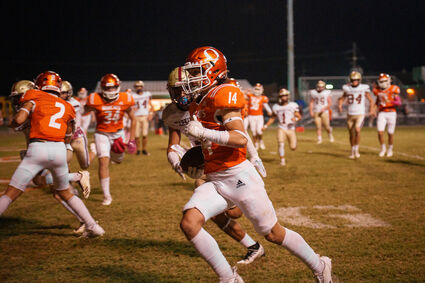 Kavin Perry-Koci rubles down the sideline for a big gain in the Orangefield Bobcat's 46-0 homecoming win over Tarkington.

The Orangefield Bobcats won big on their homecoming last week. This Friday the Bobcats travel to the Hornets' nest in Hardin to play a very good team.

The coaches at Orangefield were concerned about the Bobcats focusing on the game against the Tarkington Longhorns and not on homecoming activities, but the players responded well rolling up a 40-0 lead by halftime. The big advantage allowed many of the Bobcat backups to get some playing time and a running clock the whole second half kept the final margin of victory to 46 points for Orangefield.

Bobcat Head Coach Josh Smalley was very pleased with the efforts from his players. "It was a good win for us and we didn't have anybody get hurt that was big deal. We were worried all week about the players' mindset with homecoming and all the distractions and they did a great job, they were focused. We scored on the third play of the game and we kind of never looked back," Smalley recalled.

Special praise from Smalley went out to the offensive line which opened holes for the Bobcat runners to rush for almost 500 yards as a team. Cameron Dischler carried the ball for 254 yards and only touched the ball twice in the second half. Gavin Perry-Koci scored the first touchdown on a 50-yard run and also gained over 100 yards with three touchdowns. Case Singleton likewise had a couple of rushing scores for Orangefield.

Not only did many substitutes get in the game for Orangefield two starters were able to return to the playing field. Two-way starter Morgan Sampson got a brace for his injured knee and played on offense as tight end as well as defensive end. Rusten Traxler had missed every game prior to last week with an injured ankle but played noseguard and was named the defensive most valuable player with six tackles on about twenty snaps.

Hardin uses the Spread on offense. The Hornets' Spread looks much like the offense run by Lumberton since their new head coach Jake Smith came from Lumberton.

The Hornets have an H-Back, a fullback, and will go empty backfield at times. Hardin throws the ball about 60 percent of the time so the Bobcats' secondary will be tested by the Hornets' offense.

Leading the spread for Hardin is quarterback Jordan Hendricks who is a senior. Hendricks throws the ball well and will be looking to get the football to tall wide receiver Anthony Walters who is only a sophomore. Junior Josh Ibarra is the leading Hornet rusher, but Ryelee Kubeczka will carry the ball as well.

The Orangefield defense will be geared to stop the pass on Friday. Smalley explained, "It'll be a different test for us this week. Last week it was all about stopping the run and loading the box. This week it's going to be more of our secondary is going to have to step up and play well while we also try to get pressure on the Hornet's quarterback."

The Hardin defense lines up in a 3-4 or 50 scheme with a noseguard and two inside linebackers. The Hornet's defense is something the Bobcats also run and see a lot of with other teams in this area.

The leader on defense for Hardin is junior Adrian Ibarra. The Hornets move Ibarra, a big youngster, around from noseguard to defensive end.

The inside linebackers Trevor Jones and Landon Ponton play well in the middle. Anthony Walters is the leader of the Hornet secondary at cornerback.

The Hornets play hard on defense. "The Hornets get after you, they're coached well, they play hard, they're aggressive. I think the Hardin front seven is pretty good against the run, they play the run pretty well. It'll be a tremendous challenge for our offensive line to continue what they've done the last couple of weeks. We've got to continue to get better and it will be another challenge this week," Smalley analyzed.

Hardin will do different things on special teams. The Hornets fake punts frequently, and use different punt formations to confuse opponents as to which Hornets are eligible to receive passes out of punt formation. The Hornets do a lot of onside kicks, pooch kicks, and can kick it deep so the Bobcats will need to be alert on special teams. Smalley cautioned, "We've got to have our kids dialed in on where the ball is going and be ready because it could literally go anywhere when they kick it. There's a lot of special team stuff that we'll have to tighten up this week and be prepared for." 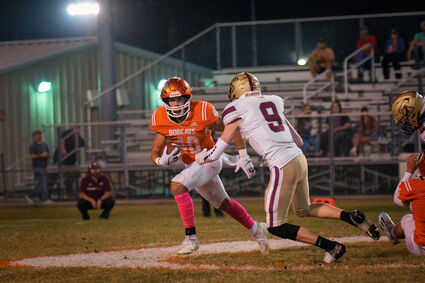 Orangefield Bobcat running back Cameron Dischler scrambles for yardage in the 46-0 homecoming victory over Tarkington. Dischler finished the night with 254 yards on 13 carries.

This is the fourth game of district for Orangefield which is 3-0. Hardin had its bye last week and has lost both its district games so far, but did win three games in a row before the district started.

Sitting in first place are the Bobcats half way through the district schedule. Coach Smalley is taking nothing for granted at this time. "We have just got to remain focused. It's literally day-by-day, week-by-week. You can't think too far ahead, and you can't think about the past. We've got a good opponent this week they've won three games, and we're on the road again. The last road trip we had was pretty good for us. We've got to see if we can do that again and have another good road trip," Smalley concluded.

The Orangefield Bobcats will try to stay undefeated in district against the Hardin Hornets. The game is Friday at 7:30 PM in Hardin.