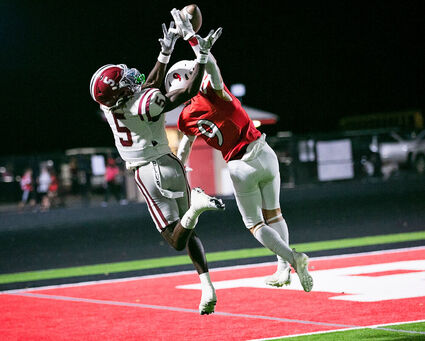 The district schedule has entered the midway point for the Bridge City Cardinals. They will be looking for their first win in district on Friday.

Cardinal Coach Cody McGuire analyzed his team's play through three games in the district. "Our defensive line is playing real well. Bryce Linder, a sophomore, was our defensive most valuable player in the game against Jasper. Nick LeJeune, a junior, played a great game. So, the future is bright with both of them coming back next year. The secondary which is young with two sophomores, a junior, and one senior played well," McGuire praised.

Linebackers Mason Pruitt and Ayden Sanders both continued their excellent play for the Cardinals. The special team for the Cardinals made a big contribution with a kickoff return by Justin Utterback for Bridge City's only touchdown.

The offense has struggled because the Cardinals are working with their fourth quarterback of the season. McGuire elaborated, "Our offense is doing the best they can as we're about to be on our fourth quarterback. Our kids are fighting, they're playing hard, they're doing everything our offensive coordinator Coach Aubry is asking. At the 4-A level when you're down to your fourth quarterback that effects a lot of things."

The Spread is the base offense for this week's opponent the West Orange-Stark Mustangs. They like to add a tight end in the lineup with two backs so the Mustangs will mix it up some with the run and the pass.

Sophomore Marcus Turner has taken over at quarterback for the Mustangs. Turner is a good passer who will try to throw to several receivers including Dakarion Judge and Nicholas Crosson.

West Orange-Stark likes to run the football and have a herd of backs to give it. Jailen Brown is a halfback who will sometimes operate out of the Wildcat formation. Raymond Mallett and Dustin Helm will carry the football for the Mustangs too. All the WOS backs can make big plays running with the ball.

The Mustangs were a 3-4 or 50 defense for years under Coach Cornel Thompson. Now under Coach Hiawatha Hickman they line up in a 4-2-5 formation on defense.

Just like their offense the Mustangs are fast including the defensive line, the linebackers, and especially their secondary. The WOS defense plays hard.

West Orange-Stark has not been as dominating on defense as it has been in previous years. McGuire pointed out, "It's been a difficult year for them, but it's still West Orange-Stark. Just because they have had a difficult year that doesn't mean much. They're going to come out and play every Friday night, and they're going to give everything they've got every game because that's what championship teams do." 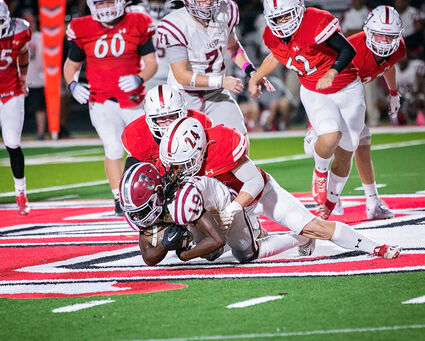 Bridge City will be looking to pull the upset when the Cardinals play West Orange-Stark on Friday. "The key for the Cardinals is doing what their coaches tell them to do, and have knowledge of their assignments. With all the moving around of personnel we've had this year that's been a concern. The kids are buying in and working hard though. It's just the results haven't been what we wanted, but the players they keep fighting, and that's all you can ask for," McGuire concluded.

The Bridge City Cardinals play the West Orange-Stark Mustangs on Friday night. The game is at 7:30 in Dan R. Hooks Stadium in West Orange.