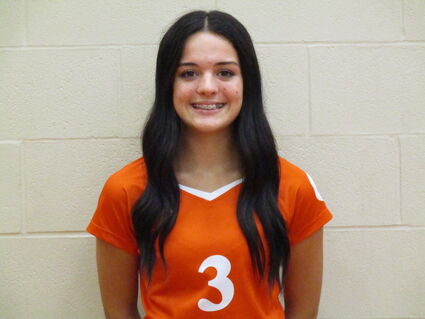 The Orangefield Lady Bobcats started the second half of their district volleyball schedule with two wins last week. The victories were against the Kirbyville Lady Wildcats and the Warren Lady Warriors.

On Friday the Lady Bobcats won a tight match in four sets over Warren. Orangefield won the opening set 25-20 before dropping the second set 23-25. Two close sets followed with the Lady Bobcats taking both of them 25-22 and 26-24 to capture the match.

Mackenzie Haley was a star for the Lady Bobcats with 11 kills, 19 digs, and 4 aces. Harleigh Rawls was outstanding with 9 kills, 22 digs, and 22 assists. Greenlea Oldham had 8 kills and Lela Francis had 7 kills. Kaylea Gravett made 9 digs and Kaitlyn Jenkins had 2 blocks. Brianna Moore matched Rawls' team leading 22 assists.

Mackenzie Haley was the Lady Bobcat leader in kills with 13 and added 7 digs. Harleigh Rawls led with 9 digs while contributing 14 assists. Greenlea Oldham had 8 kills and 2 blocks. Brianna Moore was tops with 24 assists. Kylie Mouton had 7 kills and Lela Francis had 2 blocks.

Orangefield had a big match with the East Chambers Lady Bucs on Tuesday, October 11. The Lady Bobcats were hoping to avenge one of their two district losses in that night. This Friday Orangefield travels to Hardin to play the only other team to beat the Lady Bobcats in district action.