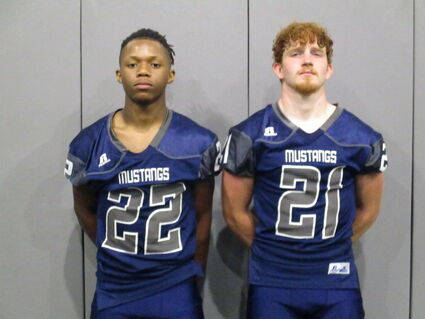 Seven games into the season West Orange-Stark is under .500 overall in the middle of district for the first time in many years. The Mustang will try to even their record in district and for the year when they play on Friday at home.

The Mustangs opened the scoring last week on their first drive against the Hamshire-Fannett Longhorns. Turnovers, missed tackles on the Longhorns' elusive quarterback, and other missed opportunities allowed Hamshire-Fannett to comeback and beat West Orange-Stark by five points.

Coach Hiawatha Hickman of the Mustangs said all the blame comes back to him. "The kids competed well. We gave up a few points we probably should not have, but hats off to Hamshire-Fannett. We needed to take care of our business, and we just didn't capitalize when we needed to," Hickman recapped.

Jamaal Shaw played for the first time since the Newton game three weeks earlier when he injured an ankle. Hickman said Shaw was used only on defense at cornerback. Shaw was held out of the offense with Raymond Mallett and Tahj Amerson doing most of the ball carrying for the Mustangs.

On Friday the Mustangs will entertain the Bridge City Cardinals who are looking for their first win in district and second victory overall. Injuries have hit the Cardinals very hard eliminating several of their starters for the remainder of the season. Hickman explained, "We looked at them early in the year against Little Cypress-Mauriceville and then looked at them last week against Jasper it's like two completely different teams because of injuries."

Bridge City operated out of the Spread on offense at the beginning of the season. Hickman said against Jasper the Cardinals used two tight ends and were not as wide open as previously before all the injuries.

Jamel Charles has taken over at running back for Bridge City. Charles showed some flashes against Jasper that he could be a dangerous runner.

Despite all the injuries Hickman indicated the Cardinals are still playing hard. "They played Jasper hard. They go out and play hard," Hickman observed.

The Cardinals play a 50 defense. They do not bring a lot of pressure, the Cardinals stay in their zones, they will slant with a little movement. In the secondary they play mostly zone coverage and do not take a lot of chances with man coverage or blitzes.

The defense has played good for the Cardinals but because the offense cannot generate very many first downs they have been on the field way too much time during their early games and it appears to effect their play. Hickman analyzed, "They really just play a base defense. They play the 50 and don't move too much and just kind of take what you give them or what you throw at them. They've played well in some spots, I just think it's being on the field too much that hurts their defense. The Cardinals play hard on defense, they just get tired from being on the field so much."

The leader on defense for Bridge City is middle linebacker Mason Pruitt. He does a good job in the middle anchoring the Cardinals' defense.

The district race has begun for West Orange-Stark which finds itself in the middle of the pack with two losses in three games. The Mustangs need a win Friday against Bridge City to reach .500 in district with two games to play after that.

Coach Hickman thinks the Mustangs are really close to clicking on all cylinders and starting a good winning streak going into the playoffs. "We put it together on offense one week, then the next week we don't put it together on offense but we play good on defense. I think we're really, really close to putting it altogether. Winning the district I don't think is in front of us anymore, but thinking about it this last weekend if we can win Friday night and then go to Jasper next week and possibly win by six and Silsbee takes care of Jasper at the end we can go from the fourth seed to the two seed. There's a lot out there and everything's still in front of us for what we need to get. It comes back to us putting it altogether for the final three regular season games," Hickman concluded.

West Orange-Stark plays Bridge City on Friday night. The Mustangs and the Cardinals will kick it off at 7:30 in Dan R. Hooks Stadium in West Orange.