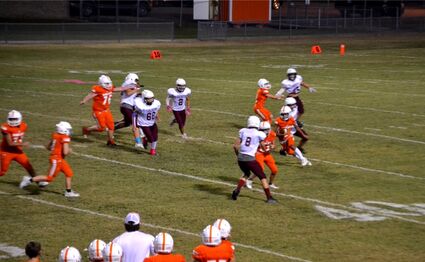 Last night was Homecoming for the Junior High, as the Bobcats took on the Tarkington Longhorns for a three-game battle royale.

First to take the field was the 7th and 8th grade combined team, and they were looking to get their first win of the year. Coach Coulter took over the reins of the offense, calling plays for the first time. Lynkon Delcambre was under center for the Bobcats. He led his troops up and down the field, picking up chunks of yardage on the ground, and flashing his speed on a 5-yard scamper that scored. The heavy lifting was done by Coach Wilbur and his defensive unit that shut out the Longhorns for their first of the year. Mikey Lecea recovered a fumble caused by Christian Shaw and almost took it the distance, but got tripped up near the goal line. Delcambre chipped in an interception, and Jackson Greiner shot through his gap into the backfield making a huge fourth-down stop. The play of the game came from Aiden Barnett who somehow miraculously dropped into coverage to intercept a Longhorn pass and run it back for a 65-yard touchdown, making the final score 12-0. This win puts the combined team's record at 1-2 and 1-0 in district play.

The 7th graders were up next, looking to keep their undefeated streak alive with a few key players returning for the Bobcats after some injuries. The fireworks started as soon as the first kick went through the air, as Korbyn Smith took the opening kickoff 66 yards to the house! Hunter Reeves converted the 2-point attempt. Hunter Block had a 6-yard touchdown up the middle and converted a 2-point conversion. Next, Gage Lucas had his usual long run of the game, going 70 yards to paydirt. Logan Anderson decided it was his turn to make his big play of the game, with a 36-yard run on a beautiful drawn-up play by Coach Pickering. Last, but certainly not least, was Koa Sides who jetted around the edge for a 12-yard run. The Bobcats lit up the scoreboard and jumped to a 32-0 lead at the half. It was smooth sailing after that, and the defense did their best to keep the shutout intact. Kolte Morgan recovered a fumble and made several big plays alongside Case Comeaux in the backfield. John Royer proved to be a force, making every tackle without hesitation as the Longhorns ran at him repeatedly. The 40-0 win puts this group at 4-1 on the season and 3-0 in district. 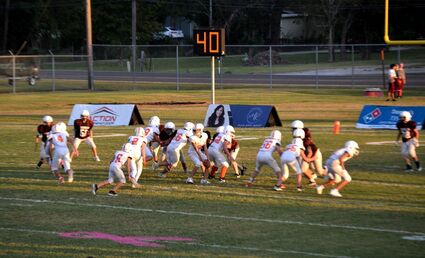 The 8th graders were trying to bring the excitement to start the game but slipped coming out of the gate as they let the opening kickoff be returned for a touchdown. Instead of being down on themselves, the Bobcats changed their attitudes and went to work on offense, scoring the most they have all season. Carson Gonzales got things rolling with a 24-yard quarterback sneak that bounced outside as he stiff-armed several Longhorns to the grass. Coach Wilbur's defense stonewalled the Horns, forcing them to point to Elijah Jones who found a crease and took it 60 yards for an easy score. Gonzales decided to show off his arm on the next series, connecting with Jack Luker on a beautifully thrown ball and an amazing grab for a 39-yard touchdown. Cole Sanches fought through several injuries during the game to keep himself on the field and used his speed to score from 18 yards out. Jones wanted to see what the endzone was like one more time and took the ball around the end for 48 more yards. This 32-12 victory makes the Cats' record 1-4 on the year and 1-3 in district.

The Bobcats will be back on the road next week, this time traveling to Hardin to take on the Hornets.