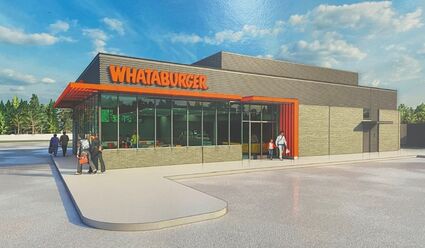 Local fast food fans will have more places to get their favorite meals as McDonald's and Whataburger are working on new restaurants in the Greater Orange area.

Chick-fil-A in Orange will be getting a Texas-favorite competitor on 16th Street near Interstate 10 in Orange as the state's beloved Whataburger is planning a new $3.1 million restaurant at 3724 16th Street.

Over in Pinehurst, a new McDonald's is planned for the west area of the former MacArthur Shopping Center on MacArthur Drive. City Code Enforcement Officer Justin Trahan said the company has not taken out a building permit, yet, but plans are for construction to begin in the first quarter of 2023.

"We're still in the pre-planning stage," he said.

A filing with the Texas Department of Licensing and Regulations shows McDonald's plans a 4,285 square foot building with two drive-thru lanes.

Trahan said Pinehurst will check with the Orange County Economic Development Corporation to see if the city might be able to get some money to help pay for the costs for the new McDonald's.

The city of Orange is the only city in the county with its own Economic Development Corporation. The city's EDC is funded through a special sales tax voters approved more than 20 years ago.

Last week, the city's EDC board of directors and the city council approved a grant of up to $300,000 to help Whataburger pay for necessary infrastructure during construction. Those projects can include things like water and sewer lines, parking lots, and equipment.

The city EDC grants are made through reimbursements after the company already spends the money and then presents the city with copies of the bills for the work.

Trahan said the Texas grocery chain HEB has not announced the beginning of construction of a new store in Pinehurst. HEB purchased the old MacArthur Shopping Center six years ago as a site for a larger store than the current HEB Pantry store in the 2400 block of 16th Street in Orange.

The city of Orange continues to attract new businesses with its economic development grants. Last week, the EDC board and city council approved another EDC grant to Sulzer Electro Mechanical Sercie, 3904 Tulane Road.

The $150,000 EDC grant to Sulzer will cover the demolition of the company's current building plus electrical and foundation work on a new building estimated to cost $1.34 million.