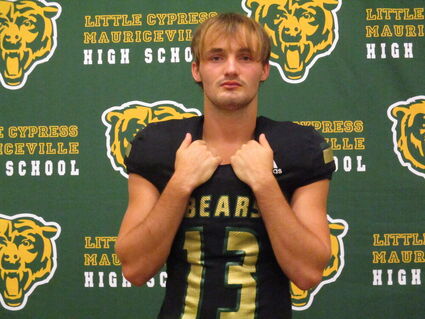 Little Cypress-Mauriceville has a winning record entering Week 9 of the high school football season. The Bears though will be looking for their first back-to-back wins this Friday night.

Last Friday LCM travelled to Livingston to play the Lions who had won three straight games including a rout of district opponent Huffman. The Bears snapped the Lions winning streak to even both teams record to 1-1 in district.

Coach Eric Peevey felt Little Cypress-Mauriceville played overall great team football. "We didn't make very many mistakes, we capitalized on the mistakes they made, we blocked real well up front, our defensive line played well. The old saying is football comes down to blocking and tackling, and when you do those things well you tend to win," Peevey reminded.

The win was also impressive after the two-hour bus ride to get to Livingston. Peevey acknowledged, "The kids knew this was a very important game in district, we didn't want to go down two losses straight. They saw the film how Livingston scored 69 points the game before, our kids knew they were going to be ready to play. Our seniors did a great job of holding the standard for the rest of the team during the week, and we just really played an overall great game of football."

A standout again for the Bears was Da'Marion Morris. He had five touchdowns in the game. The LCM offensive line opened some great lanes for Morris to run through.

Defensively Luke McDow was a leading tackler for the Bears. Amier Washington blocked a Lion punt early in the game to setup a touchdown.

This Friday will be the second home game for the Bears at Battlin' Bear Stadium. The Splendora Wildcats won their opening contest of the season but have lost their last six games including both district games to Lumberton and Huffman.

The offense for Splendora revolves around quarterback Harrison Facunda who is a three-year starter for the Wildcats. Facunda passed for 1344 yards and 13 touchdowns last year. He throws the ball to multiple receivers.

The Wildcats use a variety of running backs but their offense is centered on Facunda running and throwing the football. "He's a great athlete, just a tough football player, so the key is to slow his progress down and don't let him get on a roll getting multiple first downs," Peevey warned.

At the start of the season Splendora ran the Spread. Peevey indicated film of the game between the Wildcats and Huffman showed Splendora operating mostly out of the I-Formation with Facunda under center. Peevey admitted, "I really don't know what they're going to be giving the Bears offensively."

The Wildcats base out of a 3-4 on defense. Last week against Huffman they shifted to a four-man front. Peevey believes injuries may have forced Splendora to replace some players on defense leading to the change in the defensive alignment.

Linebacker Tyler Mericle is one of the leaders for Splendora on defense. He controls the middle for the Wildcats who move their players around a lot using blitzes and various pressures against opposing offenses.

Defensive end Julio Meza is a standout on the defensive line. "Overall they use a lot of different kids and are bringing them into shape. They do a good job of getting their kids lined up correctly. We've got to do a good job of blocking them," Peevey analyzed.

The coach would not take anything away from the Wildcats and does not want this to be a trap game for the Bears with the first place Lumberton Raiders next week. Peevey explained, "With as many young kids especially sophomores as we have it's a trap game every week. We can't look at what Splendora's record is. Once you're in district the thought is this week and only this week. That's what we're worried about."

Playing at home again and with the weather forecast to be cooling off locally Peevey believes the Bears will be excited to practice in milder weather on their new field this week. Peevey added, "We've got to hammer on this being a home game. We don't want to lose any home games, we have very few of them this year, only three, so we've got to take full advantage of them with the crowd and everything else."

The key for Little Cypress-Mauriceville is repeating the performance given at Livingston last week. Three games remain in the district schedule, and if the Bears win out they mostly likely will be the district champions.

Building on the momentum that began with the win against Livingston needs to continue this Friday at LCM. "We've got to play Bear football this week. It won't be anything flashy, we're just going to play smart football, play disciplined football, and I think that will help us out," Peevey concluded.

The Little Cypress-Mauriceville Bears play at home against the Splendora Wildcats. The kickoff will be at 7:30 PM at Battlin' Bear Stadium on Friday.