Astros in Conference Championship round for Sixth straight time 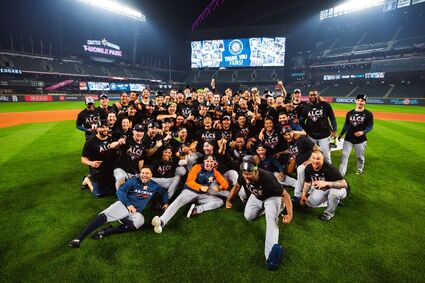 Yordan Alvarez carried the Houston Astros on his back for the three-game sweep over the pesky Seattle Mariners in the ALDS last week.

No one will deny that the two mammoth home runs Alvarez hit in Games One and Two carried to Astros to 9-8 and 4-2 triumphs after they were trailing late in both games.

But there is a player who wasn’t even around during last year’s trip to the World Series—rookie shortstop Jeremy Pena.

Pena was rushed into service at the major league level after just playing a handful of games at the Astros Class AA and Class AAA affiliates.

He seemed to be the best man for the job after All-Star shortstop Carlos Correa refused Houston’s generous offer to extend his contract during the 2021 season and finally signed a three-year pact with the Minnesota Twins.

And as a result of his greediness, Correa is sitting at home in Minneapolis watching Pena and his former teammates on television march once again toward a World Series berth.

It’s not a given that the Astros will make it again to baseball’s ultimate event, but it’s a certainty wherever the Astros end up in the playoffs will be with Pena and without Correa.

Pena contributed to Houston’s three-game sweep over Seattle in all three games. In fact, the Astros were behind 8-6 in last week’s Game One with two outs and a runner on first and had two strikes on him when he reached out on a slider (which has been his nemesis pitch to hit) and slapped it up the middle for a base hit to keep the rally alive.

In Game Two, with Houston trailing 2-1, Pena blooped a two-out single which was followed by another mammoth home run by Alvarez, this time an opposite-field blast deep into the Crawford boxes in left field. Houston scored an insurance run in the eighth inning and went on to win 4-2.

Both teams’ pitching staffs became the heroes in Game Three Saturday in Seattle. The game started at 1 p.m. there and finished 18 innings and 6 hours and 22 minutes later with the light towers glowing after Houston’s hero in the first two games belted a home run to give the Astros a 1-0 victory and punched their ticket to this week’s American League Championship Series which begins 6:37 p.m. today at Minute Maid Park.

Oh, by the way that hero from the first two games was not Yordan Alvarez, who went 0-for-7 in the marathon with two strikeouts, but Jeremy Pena, who blasted the game-winning home run into the centerfield stands. It was his only hit of the game, but it was a monster.

He was followed by Hector Neris, Rafael Montero, Ryan Pressly, Bryan Abreu and Ryne Stanek who each pitched one inning, rookie Hunter Brown threw two innings and then starting pitched Luis Garcia hurled the final five innings and was credited with the win. Servais topped that number by using 10 pitchers in the marathon.

Houston pitchers struck out 22 Mariners while Seattle countered by striking out 20 Astros batters.

KWICKIES…In the Who Cares? Department, former PGA favorite Brooks Koepka birdied his third playoff hole to win the LIV Golf Invitational-Jeddah to post his first victory on the breakaway tour, played at King Abdullah Economic City in Saudi Arabia. He defeated close friend and American compatriot Peter Uihlein, whose shot from the sand on the third playoff hole plunked into the pond.

I’m convinced that the undefeated Philadelphia Eagles are for real after the way they pushed the Dallas Cowboys all over the field in the first half Sunday night. The Pokes came out of the locker room after the intermission and reduced the 17-point halftime deficit to only three points, but ended up losing 26-17.

When Tampa Bay quarterback Tom Brady stepped onto the playing field at Pittsburgh Sunday afternoon, it marked the biggest difference in experience in the NFL’s 103-year history. Brady was starting his 322nd game while Steelers rookie quarterback Kenny Pickett was making his second start. The Steelers upset the Buccaneers 20-18 after Pickett hurt his knee and was replaced by journeyman Mitch Trubisky who threw a game-winning six-yard touchdown pass in the fourth quarter.

If former Pro Bowler Rob Gronkowski throws his cell phone away and can’t be reached by a desperate Tom Brady to “un-retire” again, he will join the Fox pre-game crew for the rest of the season plus the Super Bowl. I’m betting on that phone call—and soon.

JUST BETWEEN US…The top six teams in this week’s Associated Press Top 25 College Football Poll remained the same, but in several different positions than last week. The top two teams—Georgia and Ohio State—remained one and two, but Tennessee’s 52-49 upset of third-ranked Alabama sent the Volunteers from No. 6 to No. 3, Michigan moved up one place to No. 4, Clemson dropped one to No. 5 and the third-place Crimson Tide dropped to No. 6. Rounding out the top 10 are No. 7 Ole Miss up two spots, No. 8 TCU up five places, No. 9 UCLA up two notches and No. 10 Oregon also up two spots. Texas with its 24-21 win over Iowa State advanced two places to No. 20 while unranked Tulane took over the No. 25 place.