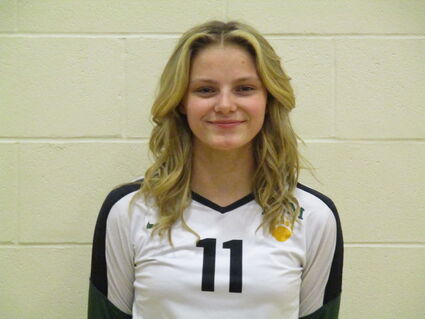 The Little Cypress-Mauriceville Lady Bears defeated the Vidor Lady Pirates in four sets on Tuesday, October 11, at the Dr. Pauline Colburn Hargrove Gymnasium. The win raised the Lady Bears record to 6-2 in district.

LCM won the first two sets 25-21 and 25-19. The Lady Pirates played a very strong third set and won 25-8 over the Lady Bears. The fourth set was the tightest of the match with the Lady Bears taking it 25-22 for the win.

Leaders for the Lady Bears were Hallie Maddox with 10 kills, Chrissy Joseph with 8 kills, and Mariah Ammons with 6 kills. Maddox also led LCM in assists with 23. Lexi Tubbleville topped the Lady Bears with 15 digs and Ava White had 9 digs.

The Lady Bears won the first two sets convincingly 25-16 and 25-15 before the Lady Raiders grabbed the third set in a very close game 29-27. Little Cypress-Mauriceville played its best to grab the fourth set 25-11 to seal the match.

The Lady Bears were led by Chrissy Joseph with 20 kills. Mariah Ammons had 9 kills and 17 digs. Lindi Perry also had 9 kills with 4 blocks. Savannah Crabtree had 12 digs and Janniliz Nazario had 11 digs. Hallie Maddox had an amazing 41 assists, 7 kills, and 10 digs for LCM.

Senior night was Tuesday, October 18, for the Lady Bears. The next volleyball match for Little Cypress-Mauriceville will be Friday, October 21, at West Orange-Stark.