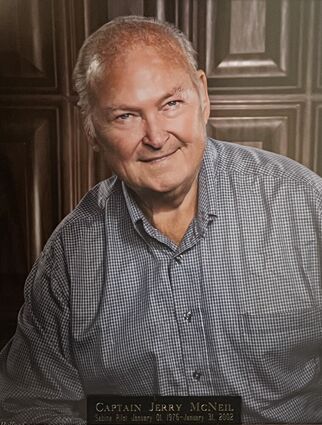 Captain Jerry McNeil, 81, of Orangefield, Texas passed away on Sunday, October 23, 2022, surrounded by his loving family.

Mass of Christian Burial will be 10:00 a.m. Thursday, October 27, 2022, at St. Helen Catholic Church in Orangefield. Officiating will be Reverend Michael Strother. Burial will follow at Hillcrest Memorial Gardens in Orange.

Jerry was born to Robert and Violet McNeil on July 13, 1941, in Beaumont, Texas. He grew up living marine life. His father was a shrimper and they traveled the coast of Texas. He live from Orange to Brownsville and several towns in-between, he grew up helping his dad on the boat. After graduating from Orangefield High School in 1959, he went to work on harbor tugs. At this time, he met and married the love of his life, Mary Ann Hebert. They started their family and never looked back. He worked his way up to captain for several years before being elected to the Sabine Pilot Association in 1975. He served as a Sabine Pilot for 26 years before retiring in 2002. There is no waterway that he didn’t love, especially Johnson’s Bayou.

Two things you would know if you met him. Nothing in this world was as important to him than his family! Everyone that met him became a friend and he would help if ever asked. Second, Jerry McNeil always did it his way!

He is preceded in death by his parents and his brother, Robert McNeil, Jr.

In lieu of flowers, donations may be made to St. Jude’s Children’s Hospital.