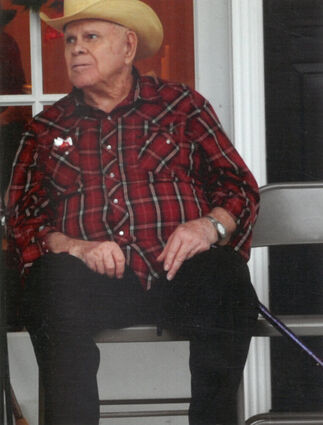 Gene Melvin Brown, 88, of Mauriceville, Texas, joined many family members in Heaven on October 21, 2022. He was under hospice care at KeKe’s Place in Mauriceville. Gene was born in Lemonville, Texas on September 7, 1934, to an already large family that would continue to grow to a total of nine children. He grew up in the Mauriceville area and attended Mauriceville High School where he graduated early and then began his work life. Gene began his career by working on a tugboat until he was offered a position at Firestone. After beginning his career at Firestone, Gene was called to serve in the United States Army, which he proudly did before returning to Orange and resuming his career at Firestone, which would last until his retirement. He was also a member of the Pentecostal church. When asked in his later years, Gene would say his proudest achievement was working for Firestone for 32 years. Gene loved country and bluegrass music. His fondest memory was playing the harmonica in a country band. His favorite musicians were Huey Buxton and Britt Godwin, and he loved attending live performances of both. Gene enjoyed living life and loved to visit family and friends, especially when good food was part of the visit. Gene is survived by his daughter, Suzanne Brown Spry of San Antonio, Texas; his grandchildren, William Davis Spry and Lisa Spry Helms; two great-grandchildren, Julie and Max Helms, all of Virginia Beach, Virginia. Gene is also survived by his brother, Patrick Brown and wife Gloria of Deweyville, Texas; and his sister, Carolyn White and husband Ardell of Vidor, Texas; brother-in-law, Thomas Perry of Mauriceville; sister-in-law, Mae Brown of Buna; as well as many nieces and nephews. He is preceded in death by his parents, Walter and Altha Brown; his sisters, Mozelle Glende and Marilyn Perry; and his brothers, Marvin Brown, Al Brown, Bruce Brown, and Warren Brown. Serving as pallbearers will be Gene’s nephews, Larry Glende, Edward Jones, Butch Brown, Drew Peet, David Perry, and Buddy Howlett. The family would like to express a special thanks to David and KeKe Fairchild, and all of the staff at KeKe’s Place in Mauriceville, and Southeast Texas Hospice, who provided such excellent care and love to our family member. You all are truly God’s angels! The family has entrusted Claybar Funeral Home with the arrangements. A visitation will be held at 12:30 p.m., Wednesday, October 26, 2022, at Claybar Funeral Home in Orange, Texas. A funeral service will follow immediately at 2:00 p.m., with Gene’s nephew, Mike Brown, officiating. Interment will follow at Wilkinson Cemetery in Orange, Texas.