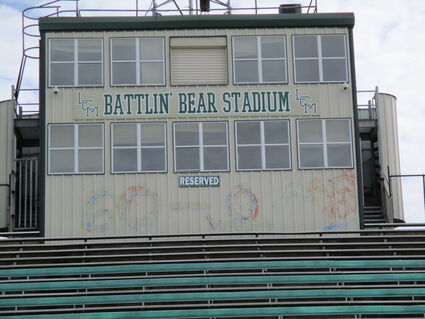 The two preseason favorites in District 10-4A Division I play on Friday night. The winner of the game between the Little Cypress-Mauriceville Bears and the Lumberton Raiders will take a big step to winning the district championship.

Within a couple of days of that game intruders vandalized the new artificial turf field at the stadium, the stadium's press box, the visitor's concession stand, and facilities at the neighboring baseball field. The vandalism is under investigation and will cost thousands of dollars to repair. Two unknown young males are suspected in the incident. The turf company Hellas will be at Little Cypress-Mauriceville High School this week to repair the football field that was spray painted. The LCM maintenance staff has worked to remove much of the vulgar graffiti spray painted on the buildings and will be repainting all the damaged facilities.

Coach Eric Peevey said the Bears had a solid game plan for the Splendora Wildcats last week. "I felt like the kids executed that game plan well. We were able to start fast on offense getting Morris in the end zone early," Peevey recalled.

LCM scored on its first play from scrimmage. Da'Marion Morris only had seven carries in the game but piled up about 160 yards for the Bears.

Special teams for Little Cypress-Mauriceville played really well early. Kyler Garlaska made several strong tackles on kickoff returns by the Wildcats. The Bears defense limited the Splendora offense to just one score. The only miscue on the night was a bad snap on a punt that resulted in a safety and two points for the Wildcats.

Bears that received accolades from the coach included Morris and Garlaska plus sophomores Tucker Floyd at linebacker, Jonah Fuller who had an interception, and lineman Clayton Farwell who graded very high for his play against Splendora. Peevey elaborated, "Overall, I feel like our younger guys are getting better and our older are doing what they need to do. That's two wins in a row and now it's onto Lumberton."

The victory improved LCM's district record to 2-1 going into this week's game. The Lumberton Raiders are 7-1 on the season and have won all three of their district games outscoring Splendora, Vidor, and Huffman by a combined 110 points.

Lumberton's offense is high powered and multiple. The Raiders like to throw the football, and they can run the ball down opponents' throat when they want to do that.

Raider quarterback Lucas Powell is the district leader in passing completing 71 percent of his throws for 1,941 yards and 31 touchdowns. "Lucas is a tremendous quarterback, great under pressure, throws a great deep ball, throws a great medium ball. They don't miss their big shot plays," Peevey pointed out.

Lumberton has a wonderful group of receivers for Powell to throw the ball. The most dangerous is track star Brady Fuselier who has 13 receiving touchdowns and is averaging 24 yards a reception. The leading pass catcher in the district is Trey Kersh with 45 receptions and 9 touchdowns. Kaleb Koch has 25 catches good for 5 touchdowns.

The primary runner for the Raiders is Jaddon Ward who looks like a human bowling ball. Ward is not tall but at 210 pounds he can literally roll over tacklers and is second only to the Bears' Morris in the district for rushing with 871 yards good for 6 touchdowns.

The Raiders can use a hurry-up offense to keep opposing defenses from changing personnel. They can snap the ball in just a few seconds between plays.

The game plan for Lumberton on offense is pretty simple. Peevey described, "They spread you out and when you thin your people in the box they give it to Ward and he makes people hurt for it. Not the most complicated offense, but probably the most dynamic offense we've seen this year and they can score on any play. They are very confident right now in their scheme and what they are doing."

The Lumberton offense gets most of the headlines, but the Raiders are solid on defense too. Seven starters have returned from last year's playoff team at Lumberton.

The defense uses an odd front and the Raiders' three defensive linemen are the key to the team's success on defense. Noseguard Brock Jackson, Grayden Spencer at one end, and Aidan Millican at the other end position are all big bodies that cause a lot of havoc and pressure to allow the other Raider defenders to drop back in pass coverage or execute blitzes.

Lumberton is solid at linebacker with Jared Morgan and in the secondary with Carson Rea who is tied for the district lead with three interceptions. "The Raider defensive line is what gets things going, and we definitely have to try to neutralize that," Peevey strategized.

Despite the two game winning streak by LCM a playoff berth has not been locked up with two games still to be played. Each of the last two games is huge for the Bears not only to clinch a place in the post season but also for seeding in the district. 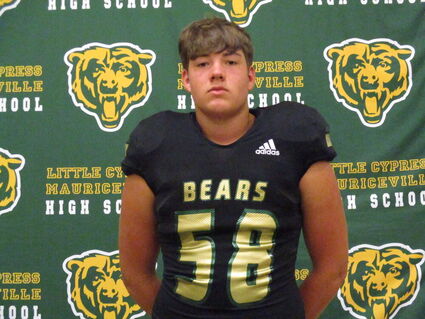 This week's game with Lumberton is a big one for the Bears. Peevey explained, "Because of the fact the Raiders beat Vidor and that's something we didn't do, if we're able to come in and play our style of football and be able to beat them then that would put us in a three-way tie for the lead, and that's what you always want. You always want to have a chance to fight for the district championship."

The district championship is the ultimate goal for Little Cypress-Mauriceville but making the post season is the first priority. "I feel like three wins locks us in the playoffs. The biggest deal is getting a win this week we lock in the playoffs and the rest of the chips may fall afterwards wherever they fall. With us playing on a high right now I would like to continue that high," Peevey concluded.

Little Cypress-Mauriceville travels to Lumberton on Friday night. Game time will be 7:30 for the Bears and the Raiders.