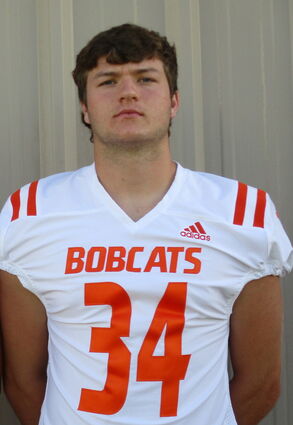 The bye week for a football team is always useful to rest and re-cooperate from injuries. The timing of a bye can be inconvenient at times when it breaks a team's momentum created by consecutive victories.

That is the concern for the Orangefield Bobcats who won four straight games to start their district schedule before their bye last week. The Bobcats won their last two games by a combined 107 to 7 margin.

Coach Josh Smalley is hopeful Orangefield will continue to perform well in all phases coming off the bye. "The bye week is good because it gives us time to heal up a little bit and to recover from any injuries. But it's bad because we were rolling on a four-game winning streak and now we've got to worry about can we get that momentum back after we haven't played for a couple of weeks. That's where my worry is right now, can we recreate the momentum we had before the bye, and are our kids staying focused enough to understand that next week doesn't matter if we drop the ball this week," Smalley admitted.

The Bobcats continued to work during their bye week. Practices were initially not full contact, there was a lot of conditioning exercises, and lifting weights strenuously were the bulk of the activity.

The bye also allowed Smalley and the Orangefield coaches to work with the younger Bobcats that normally do not get a lot of time during an actual game week. Giving those younger players extra reps is important to get them better prepared if they are needed because of any injuries to starters when the playoffs do roll around.

About on Wednesday of the bye week Orangefield got film on the Bobcats' next opponent the Kirbyville Wildcats. This allowed the coaches to implement strategies for that game with the players.

With eight games played there are numerous bumps and bruises for various Bobcats. Two-way starter Morgan Sampson returned from his sprained MCL knee injury to play well against Tarkington two weeks ago only to tear his posterior cruciate ligament (PCL) in his knee during a non-contact practice on Tuesday of the bye week.

Sampson's injury will not require surgery. Smalley elaborated, "It's not season ending. The doctors are saying he can rehabilitate, strengthen it, and come back so we'll see how that goes."

The Kirbyville Wildcats come to town on Friday to play the Bobcats. The Wildcats have had a bit of a rollercoaster of a season winning their first game by 52 points, losing their next six games, and have now won two in a row by a combined 44 points. The game with Orangefield will be Kirbyville's final game of the regular season as their bye is in Week 11.

On offense Kirbyville will setup with slot backs similar to the alignment used by the Anahuac Panthers and the Newton Eagles. A common characteristic of those offensive formations is an unbalanced line and running the scat, the scat trap, and toss plays.

The Bobcats will have to be alert for the way the Wildcats line up on every play including five players on the line of scrimmage to one side of the center and just one player on the other side. "We'll need to understand the formations if they're unbalanced and we've got to shift, know who's eligible for a pass," Smalley explained.

The Wildcats will also line up in the Spread and use the passing ability of their quarterback Jace Huffman. He has gotten better and grown into the position as the season has progressed according to Smalley. "He runs the ball well, he throws the ball well," Smalley added.

The main offensive weapon for Kirbyville comes from the Wildcat running game. A trio of terrific backs spearhead the offense with Azion Mahathay, Ashton Anderson, and Taylon Alfred running hard and possessing a lot of speed.

The front line for the Wildcats is big. Tackle Jarron Roden, guard Hunter O'Bannion, and center Mike Smith are all strong blockers to open holes for the Kirbyville backs. Tight ends Ryan Nation and Bron Melvin block well on the edge for them.

Stopping Kirbyville from running the ball will be very important for the Bobcats on defense. "They do a good of pulling and trapping. The Wildcats are really good at what they do. When they want to throw the ball deep they have Brent Garner and Ethan Rawls big tall kids who can go up and get the football. It poses a challenge to us defensively to be able to lineup to all those formations, and they do it at a fast pace," Smalley analyzed.

Kirbyville bases out of the 3-4 on defense with a noseguard similar to Orangefield. That noseguard is Jace Gore who maybe small for the defensive line but is very quick and can cause a lot of problems for opposing offenses that do not block him successfully.

Insider linebackers Bron Melvin and JC White attack the opposing offensive backfield. Smalley suggested, "That's really the story of their whole defensive philosophy. They don't sit on the line of scrimmage or read anything. They're coming, they're attacking, they're trying to get in the backfield, and cause a bunch of disruption."

Another Wildcat the Bobcats will need to block is defensive tackle J'Kwon Brumley who is about 300 pounds. Wide receivers Garner and Rawls are standouts on the edge of the Wildcat defense.

The playoffs have been clinched by Orangefield but seeding is still very undecided with two games remaining for the Bobcats. A victory against Kirbyville would go a long way to securing a possible district championship for Orangefield.

Coach Smalley does not want to look down the road to the game with East Chambers which could guarantee a district title. "We're focused on Kirbyville. They're a good football team, they're coming in on a two-game winning streak. They've got a lot of speed, a lot of athleticism, they are probably the biggest team physically we've seen since Buna as far as their offensive and defensive lines. Defensively we've got to stop the run, recognize formations to be sound how we line up, and make tackles. Offensively it's going to be controlling the front, if they decide to blitz we've got to pick it up. Our lineman have to have their eyes up, the running backs need to block well, we can't turn the ball over, and we can't have penalties," Smalley concluded.

The game between the Orangefield Bobcats and the Kirbyville Wildcats will be Friday night. The kickoff is 7:30 at F. L. McClain Stadium.